With all gifts now opened, photos can be shown of a project that was secret until Christmas.

For a couple of years I've wanted to make a portrait quilt of my granddaughter, Lucy, as a surprise for her parents. The trick was finding a photo of her that had enough contrast to "posterize" into three clearly defined tones. This is the posterized photo... 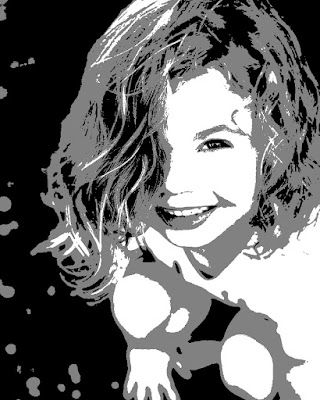 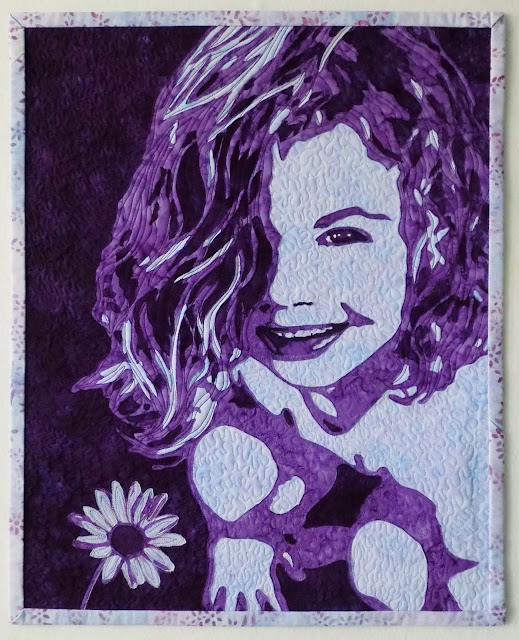 I've only made one other portrait quilt, several years ago, for my son who was grieving the loss of his best friend. I learned the process from a couple of books, but now there are videos on the internet that teach it step-by-step. It isn't hard, but there can be a lot of fussy-cutting, especially if you are including shading and highlights in the subject's hair.


Below are a few photos of the quilt in progress: 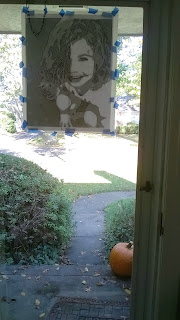 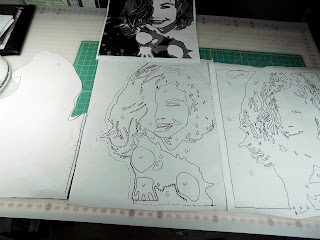 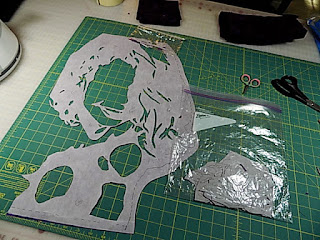 (The 80+ dark pieces are backed with fusible web, rough-cut and waiting in the plastic bag, to be fussy-cut and fused to the quilt last.) 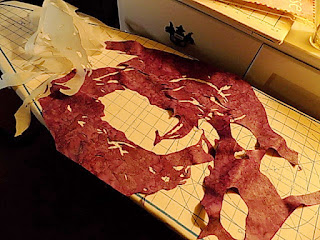 Paper backing torn away...medium-tone fabric ready to be fused onto the light-tone background (off camera). Being all one piece, this was tricky to position correctly. (The color looks wrong here just because of the incandescent light shining on it. All the other lights are full-spectrum lamps.)  > 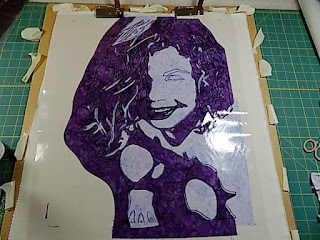 < Fused! It was going well, but at this point I was getting nervous--it was time to make her eye and her eyebrow, and I knew that could make or break the quilt. 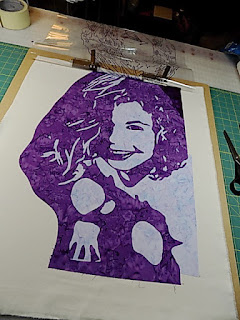 It went fine, but boy, was I careful, especially when
painting the white spots in the pupil. Breathed a huge
sigh of relief when that was done and I realized this
portrait might be a success after all.

Got so caught up in what I was doing, I forgot to photograph the dark sections as they were fused. 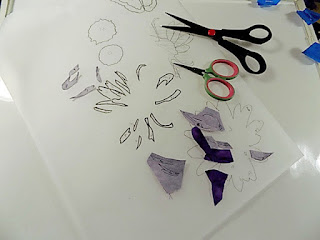 Time to piece the flower (this time the light box was used). The flower wasn't in the photo, but because Lucy's crouched position wasn't totally clear after posterizing, I needed something that was obviously near the ground to give it context.

All total, this project took me 63 hours, from the first photo tracing to sewing my label on the back. I don't know if that's fast, slow or average, and the only reason I logged my time at all was in case I ever decide to make another one. It's always good to know how much of a commitment you're in for beforehand.

Would I do a project like this again? Probably, but only as a heartfelt gift, like this one; never on commission (actually I don't make anything on commission, deadlines having proven fatal to my creativity). Those 63 hours were grabbed at every possible opportunity during November and December, which was quite a feat with holidays and Christmas prep happening. To be fair, I did manage to make two couch-sized quilts for Lucy for Christmas, but working on anything for my Etsy shop was out of the question.

Next time there will be a small landscape art quilt, using very little piecing.