Petal to the Metal

Hi, hope everyone's holidays have been fun! Around here, as with most folks, some things sped up and others slowed down.

were finished, it was full speed ahead (as much as possible) on the work in progress.

As mentioned in the last blog post, I envisioned a large-scale flower against this pieced background of hand-dyes. So, voila!--it appeared.

Well, okay, it only appeared after some drawing and tracing. (Notice the kitchen paraphernalia that came in handy here.) 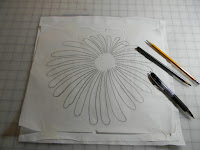 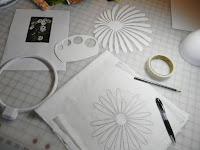 Meanwhile, some of nature's other creatures and features also appeared from my stash for auditioning, along with some Northcott Stonehenge fabric (thank you, Alex and Shannon) for a bottom border--which went a long way toward grounding the whole scene.

I liked the fact that the foreground colors were echoed in the leaves near the top, but felt that some blue needed to be in the foreground for balance.

After auditioning a traced profile with some blue fabric pinned to it (below at left), I decided to go ahead and piece and paint (and color-pencil) a blue jay. 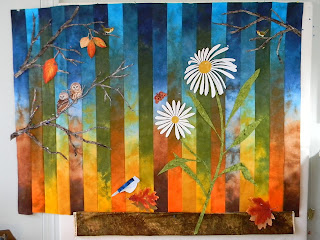 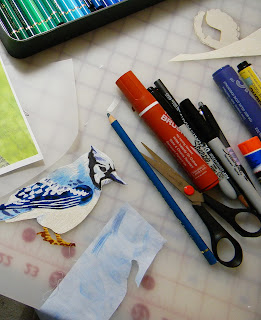 After that it was time to take a break and audition some thread. These are the variegated spools my dear friend Janet recently gave me when she decided to switch to a different line of thread for her longarm. Some of them should work really well for this project.

With a few more tweaks to the quilt top, I hope to sandwich the quilt and put PEDAL to the metal in the next couple of weeks.

I hope you've been able to squeeze some quilting time into your holiday schedule. If you're anything like me, nothing maintains or restores your sanity like working on a quilt.

Linda
Posted by Linda Wulf Koenig at 3:50 PM 6 comments: Links to this post

This week I pulled (once again) some hand-dyed gradients from my stash to pin on the design wall for yet another good, long stare. These gorgeous fabrics always give me an infusion of inspiration.

From the day they were ordered, I started mentally designing a landscape quilt with each piece. But after a couple of years of periodic auditions and longing contemplation, I finally had to concede that, for what I had in mind, there really wasn't enough fabric (only a half-yard each). By the time each piece was quilted and squared, it would be too narrow for my original idea to work well. Bad planning from the get-go.

'Let your plans go,' I told myself. 'Let these pieces work together, instead, to come up with something totally different.'

So--horror of horrors!--I would cut and piece them. (No doubt, Vicki Welsh wouldn't have the slightest problem with that, but in my funny little head, these fabrics were meant to stay intact, by golly, with all their lovely, organic, gradient morphing untouched.)

You'd have thought I was a reluctant surgical intern. Rotary cutter, please. Aaaaaaggggggghhhhhhhh! It was painful, but with grim determination on my part, each of these three beautiful pieces was cut mercilessly into strips. 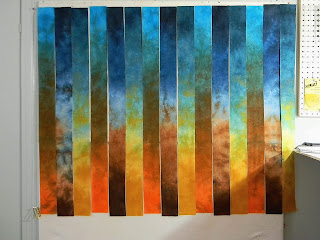 And the first audition wasn't bad at all...I liked it.

But on second thought, something was a bit too predominant for me...the orange. If this was to be a landscape background, it would probably have to be a forest fire. 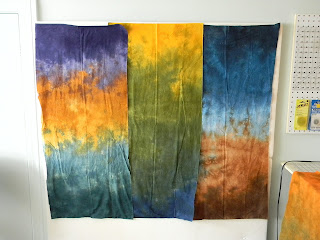 So another 1/2-yard piece was pulled from the stash--the middle piece in the photo at right (fabric washed but not yet ironed). My thinking was that the strips on the design wall above needed some green to cool them down, and maybe some more gold to level things out. And there was blue in it, to top it off.

After rearranging the strips a few times, I really liked what I saw and went on and sewed them together so there would no longer be any question about it. Moving forward! 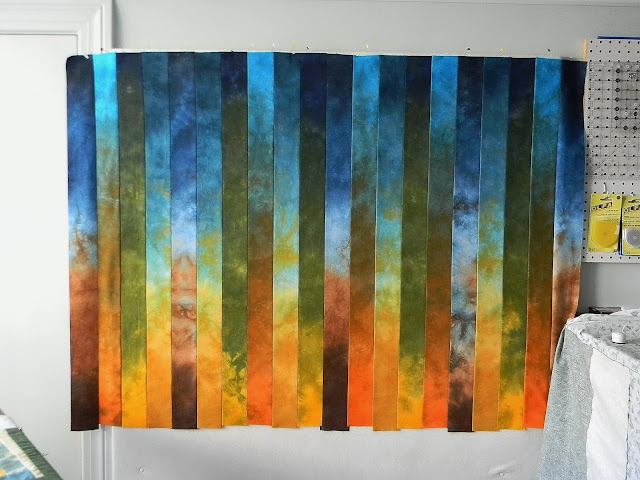 I still didn't know what was going to happen with this, but had long ago learned to trust the muse and the process. So, no worries. One element did keep popping into mind--a particular flower, large-scale, against this background. And later, when my son took a look at the background and said he could imagine an autumn scene there, I was off and running. More to show next week, hopefully. 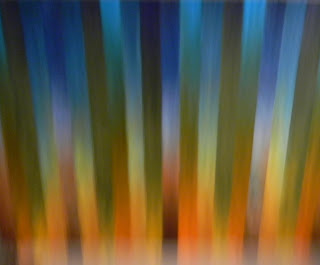 The photo at left was taken totally by accident; the button was pressed unintentionally while the camera was in motion. I'm glad it happened, because it turned out pretty cool.

Linda
Posted by Linda Wulf Koenig at 6:20 PM 4 comments: Links to this post

Pretending it hasn't been a month since my last blog post, I'll just casually pick up where I left off.  :) 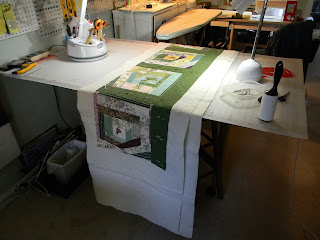 After finishing The Overlook, my last landscape quilt, I went back to the donation quilt begun a few weeks before. It's a quilt-as-you-go and sort of a crazy quilt, in that the blocks are pieced in a wonky way.

However, the idea with this particular QAYG was to use no joining strips. Instead, you baste each row of the quilt top to an oversize strip of batting, then quilt each batted row one at a time to a whole-cloth backing. A good friend of mine has been doing this for years to cut down on bulk and weight on her small sewing machine. You start with the middle row and quilt it to within an inch away from the edges. Then you seam that row to the next row of blocks, trimming the batting to meet up with the previous row of batting and connecting the batting with either hand-basting or iron-on batting tape. Commence quilting, including the inch you avoided quilting in the previous row. As in the traditional QAYG method, you're keeping the bulk of your work to your left while quilting on the right. 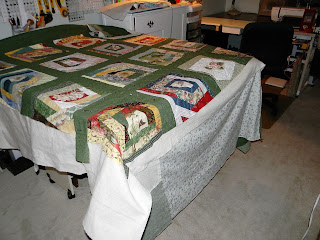 The upside to this method is, again, that there are no joining strips to deal with, since you've already joined your blocks (sashing optional), and the back is whole-cloth (or pieced, like mine, into one big backing).

The downside(s) to this method did not become apparent until I was quilting the third row. Using a free-motion stipple, I noticed it was getting more and more difficult to move the quilt. By the end of that third row, with two rows to go, I was so stiff and sore that I halted the project to figure out what my problem was.

And finally it hit me. There were actually two problems. First of all, my friend, who as mentioned uses this method all the time, never uses commercial batting. She always uses an old flannel sheet...warm but lightweight and very supple. I, on the other hand, was using a fairly heavy cotton batting.

The other problem was the difference in my quilting and hers. She uses a dual-feed foot and a straight stitch for the entire quilt, either in a grid pattern or stitch-in-the-ditch. I was free-motion quilting with the feed dogs down. Huge difference!

Knowing I didn't have the physical prowess to continue stippling, I attached the dual-feed foot, returned the feed dogs to the 'up' position, and marked some lines on the remaining two rows. Because of the weight, though, I still couldn't maneuver the quilt the way my friend does, so with every line of quilting, instead of turning, I had to break thread and start the next line fresh. What I should have done to save some of this hassle was quilt the last two rows at once, instead of continuing quilting one at a time. Hindsight is great, isn't it? So all told, there are now dozens of knots buried behind those last two rows.

A couple of other problems ensued along the way, but I'll spare you those. Suffice to say that the upshot of it all is, I don't trust this quilt enough to donate it. It will stay right here in my house where it can be observed throughout several launderings to see how well it holds up. Lesson(s) learned!

I had no suitable fabric to make binding, so leftover strips from the back edges were pieced together instead...which is why you see white areas on the binding.

Here's my favorite block, but only because of the center motif: 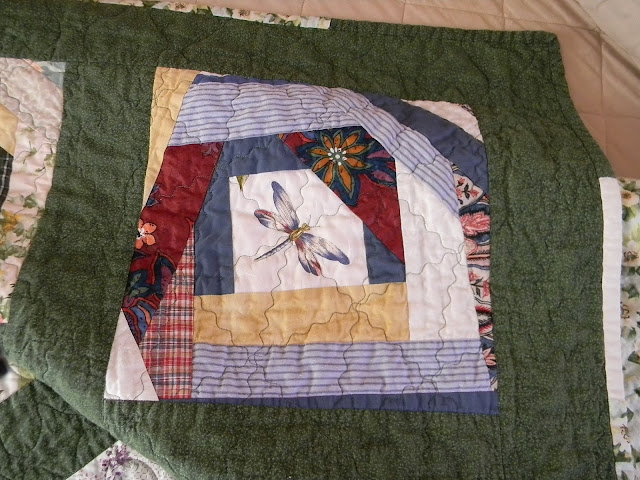 So, done and done. And never to be done again. Back to the usual QAYG method for me--joining strips and all!

Have a wonderful weekend~~

Linda
Posted by Linda Wulf Koenig at 3:27 PM 4 comments: Links to this post