Voting Day in the Stew-dio

Yep, I'm stewing in my studio, and I could use some input. Continuing my self-assigned 'color therapy' project this week, I'll at least have some progress to show over at The Free-Motion Quilting Project on Friday. That's assuming Leah Day isn't knee-deep in bathroom tile at the time. The woman amazes me!

I'm also linking up with http://fiberartistjourney.blogspot.com/2013/04/100th-post-anniversary-design-wall.html, where you'll see hand-dyed and handstitched books made of felt...they're gorgeous!

As mentioned in my April 12 post titled A Change in Scenery, I had just on impulse pieced a colorful, 15- x 22-inch quilt top. What I didn't mention was that April 12 happened to be my dad's birthday and, as he passed away a year ago this week, it was probably more than just some color I was needing when I pieced this. I was trying to boost my mood. 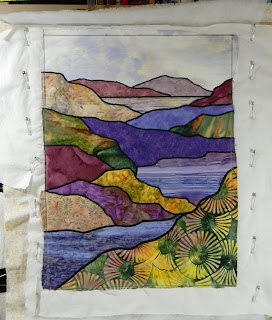 It worked, thanks to some vivid, jewel-toned batiks and the distraction of starting something new. (I think Dad would understand, having been an artist before he ever became an Air Force Staff Sgt. mechanic and then as a civilian took on a maintenance supervising job that left him little time for drawing or painting.) The April 12 photo of this piece showed the black lines drawn on a vinyl overlay, and the 'stained-glass' look of those lines and colors really got my attention. Now the vinyl overlay is off, the black lines are free-motion satin-stitched in Isacord 40 weight thread, and the quilting, also free-motion, is done. All the piece needs is trimming and binding. But here's what I'm stewing over, as usual: binding in what color? And should it be a print or a solid?
So today I did what I always do if that decision isn't made by the time the quilting is finished: cropped this shot to appear as if the quilt were already trimmed and chose border from the editing options, which allows me to put binding-sized borders in any color around the photo. I picked 5 or 6 different ones, saving each newly bordered photo under a different file name and leaving the original photo as is. The whole process took about 5 minutes.
I really don't think there's any faster way to see what binding (or border) color is going to make your quilt pop! Then you can start pulling actual fabrics in that color family, and you've avoided a lot of wasted time auditioning colors that won't work and having to put all that fabric away again. (I don't know about you, but that's a big deal in my current studio, where the drawers are so stuffed you can barely fit your fingers between fabrics. You should see my cuticles. Ugh...and ouch!)
After weeding out a couple of the photos, we're down to three choices for the binding: a medium-to-dark green, black (to go with the satin-stitching), and a magenta shade. Here are the three candidates (I'd line them up to make it easier, but there isn't room): 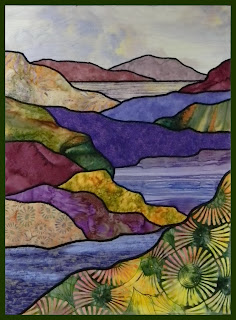 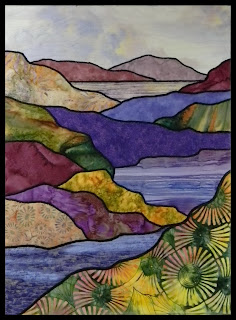 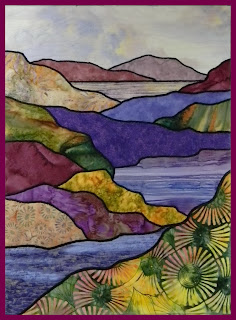 At this point, 'votes' would be more than appreciated. Then, after deciding on a general color, I can audition both prints and solids in that family. I'm hoping you'll take a few seconds to chime in with your opinion. Thanks so much!

A Change in Scenery

It's Free-Motion Quilt Friday over at Leah Day's website http://www.freemotionquilting.blogspot.com/2013/04/fmq-friday-put-smile-in-it.html and she's wondering what we're free-motion quilting this week. Well, Lida Luna (see my post titled Moving Ahead before Moving) finally got sandwiched, basted and onto the machine, and by Sunday I managed to free-motion stitch the whole thing (minus Lida, the bird, who is really the focal point). My biggest concern, other than just how Lida herself would eventually be quilted and embellished, was stitching over the sheers I'd used for the first time ever in a quilt--a layer of white tulle over the moon and two layers of black organza over the tree reflections in the water. 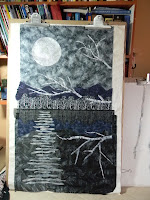 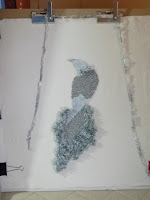 Turns out Joyce Becker was right: no worries. They stitched like a breeze, no snagging and no thread breaks, even using mono-poly thread. What a relief! I'll be much more willing and far less terrified to use sheers from now on. In this case, the tulle overlay on the moon was a must. Serving to corral the occasional runaway Angelina fiber, it also added a subtle halo, the diameter of the tulle circle being roughly two inches more than that of the moon. (If you click on the photo below, you can see it.) 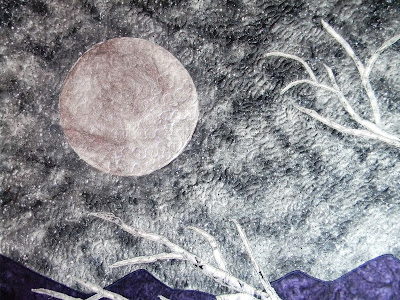 As the background came close to being finished, I thought I'd be anxious to get Lida on the quilt, but instead I found my focus and enthusiasm oddly waning. Two days later, it hit me. Outside my window, color had recently appeared everywhere--daffodils and hyacinths blooming, the tulip poplar tree and forsythia hedges bursting with blossoms. Lida Luna is essentially a monochromatic piece, lots of black, grays, silver, an extremely deep purple and some midnight blue, and I'd been looking at it in my cramped little studio for weeks. What I needed was some color!

I didn't want to start another large project just yet, so Tuesday I decided to piece one of those fun, multi-hued and multi-hilled landscapes I've seen in landscape-quilting books, using this little sketch I'd made on a notepad a couple of weeks back. 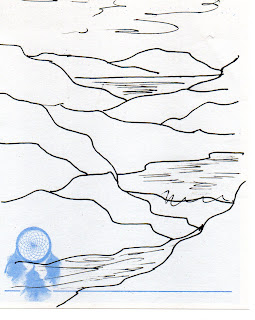 After scanning and enlarging it on 4 sheets of printer paper, I traced the sketch on clear vinyl and laid it over a piece of muslin. Out came the iron, all of my paper-backed fusible web, and a drawer full of batik fat quarters. I wanted lots of jewel-like colors and maybe even a sort of stained-glass look for this little piece. By Wednesday evening, I had a quilt top temporarily fused (and pinned when I ran out of Steam-a-Seam2) to the muslin on my design board. Remember, the black lines are actually on the vinyl overlay. But I like them so much that I'm considering black satin-stitch on all the raw edges. It really does make it look a little like stained glass! 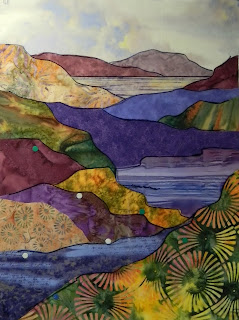 It's amazing how color can perk up your mood. This is only about 15" x 22," so it won't take long to quilt. I guess it's one of those unplanned little bonuses you get when you act on impulse--a change in scenery, a boost in energy, and an item to add to your inventory if you sell your work (which I do) or give as a gift. Having spent only a few very fun hours piecing this, I'm not emotionally attached to it, so it won't be hard to let it go once it's quilted and bound. And it's small enough that if I do decide to hang on to it, wall space won't be an issue. Especially in the new studio. (Which, by the way, is only waiting for new carpet--which we ordered from Home Depot with the exciting prospect of quick delivery and installation. Nope. Turns out the factory was fresh out of that color and it would be another 3 weeks just to get it milled and delivered to the warehouse. Then we'll schedule the installation. So, maybe next month. Crossing my fingers.)

Be sure to check out the quilting blogs that are linked up to Leah Day's post, using the link above. Better make a cup of coffee or tea first, though. These folks do amazing work, and you're going to want to settle in for a while to peruse it all. Have fun, and if you're a free-motion quilter and blogger, be sure to link up yourself!
﻿
Posted by Linda Wulf Koenig at 6:26 PM 2 comments: