This week saw a finish for the underwater quilt. Nothing was added to my original design except the sapphire-blue binding. Again, I loved the background so much I just didn't want to add any more detail or even any borders. 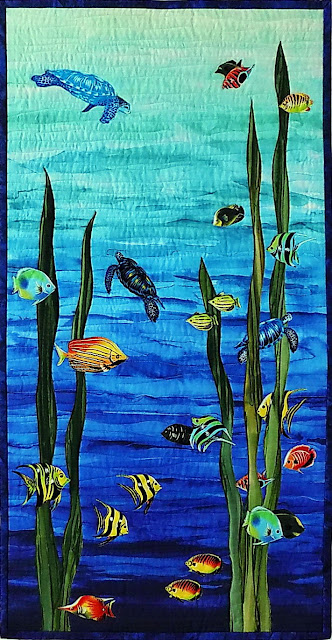 Beneath the Waves is 22" x 42" (the full width of the background fabric turned lengthwise). The fabric is Gradients by Moda.


The seaweed was cut from a half yard of Kaufman Artisan Batiks Patina Handpaints. (The lake in my quilt Still Waters is a large piece of this same fabric and colorway.)


The fish and turtles were cut from West 22nd CX1418 Tropical Fish, and fused with Steam-a-Seam II Lite. UPDATE: This is a Michael Miller Fabric, by the way.


There is a mistake in this quilt that really tickled my funnybone when I discovered it, which was after all the applique was fused. I chose not to correct the mistake, since it's subtle and would have required a bit of re-designing. (Hint: you might figure it out if you can look at the photo upside-down. I first noticed it when the quilt was turned upside-down on the ironing board.)

Will I tell potential customers about this funny mistake? Nope. It's just not a big deal. Something even funnier happened with a landscape quilt I made and sold many years ago, titled Change in Routine and shown here below. See all that golden hay just behind the fence?

After I had completely pieced and fused/glued the scene, I suddenly realized there were tiny minnows...yes, FISH...all throughout that fabric! What I had thought was prairie grass was actually an aquatic plant. That gave me one of the biggest belly-laughs ever! Couldn't believe it had taken me all that time to notice all those minnows. That mistake, though, needed correcting. It was one of those things that, once you see it, you can't un-see it. I used a golden-yellow paint marker to obliterate all but one of the fish...I left it there as a wink to myself, even though I'll never see it again.

Those are the only two such instances in my landscape quilting "career" that I know of. Hopefully they're the last, but I'm not crazy enough to bet on it.

Email ThisBlogThis!Share to TwitterShare to FacebookShare to Pinterest
Labels: Beneath the Waves, Change in Routine, underwater scene

This week it's an overdue finish for the third (and last!) triple-arch window quilt, Forest Villa. 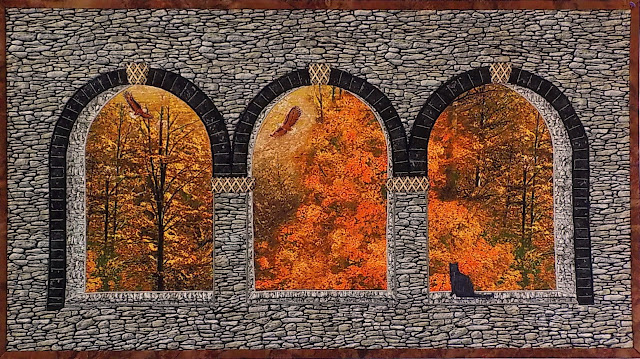 Here are some closeups: 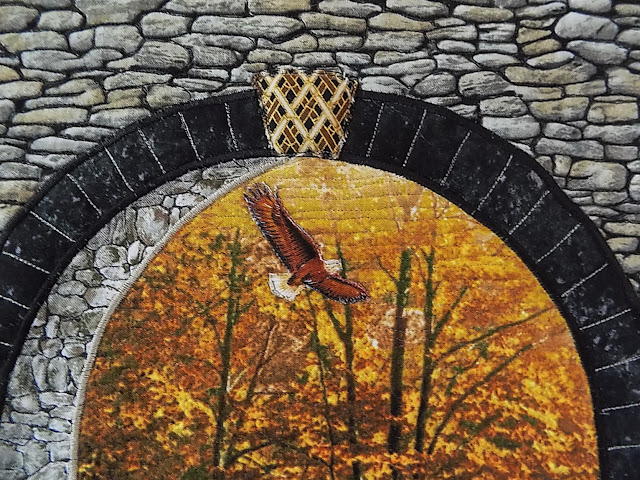 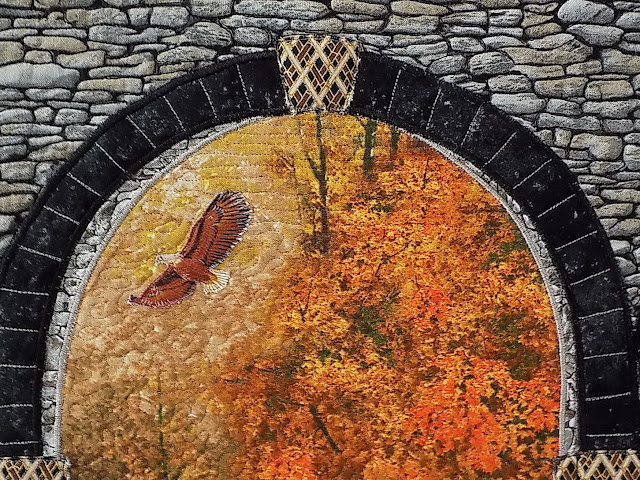 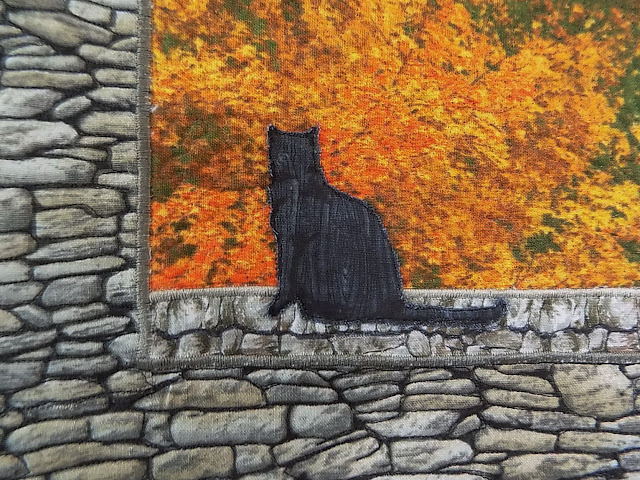 As I finished this landscape quilt, it suddenly occurred to me that I had packed the previous arched-window quilt, Wooded Villa, for shipping without sewing a hanging sleeve on it. If that doesn't prove I was ready to be done with this series, I don't know what does!

Next week, a finish for the undersea quilt.

Have a wonderful weekend!

You know you're a fabric geek when you freak out upon seeing a character in Outlander wearing something you've only ever seen in your stash... 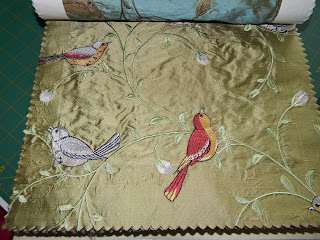 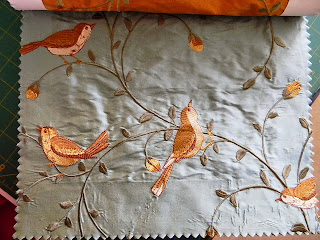 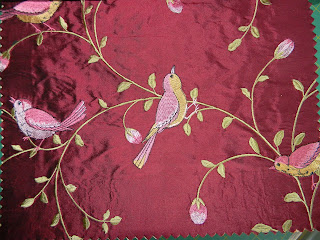 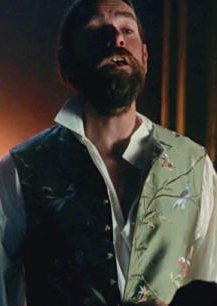 ...Murtagh!! In season two, episode six, Suzette dresses him in a luxurious waistcoat for the ball at the Palace of Versailles. When I first saw it, I rewound the dvd and paused it to make sure...and it is the same, or nearly the same, bird fabric (in a different color) as the ones from my upholstery sample books! Shiny fabric (I don't remember what type) with beautifully embroidered birds all over it. I still don't know what I'll do with them (the pieces are only about 8" x 10", if that).

On the quilting front, I just received the binding fabric for Forest Villa (the last triple-arch window quilt) and am waiting for the binding fabric for the underwater scene, which is now quilted, blocked and trimmed. Meanwhile, there's a new lake/sailboat scene on the design board, incorporating an interesting stripey batik I've always wanted to use for water.