This week, the cabin section of the Overlook quilt was pieced, using Steam-a-Seam 2 Lite paper-backed fusible.


It didn't take long to realize I'd be better off omitting the deck (especially the railing) and going with a simple wood cabin.


Added some trees, and a bit of meadow grass on the distant downhill slope.


But the cabin looked too plain and blank without windows, so some pale gray-blue batik was fused onto the cabin wall. Then the whole cabin was touched up, windows included, with a Marvy fabric-paint marker and a Sharpie marker. (Later, the trees were highlighted with a yellow fabric marker.) 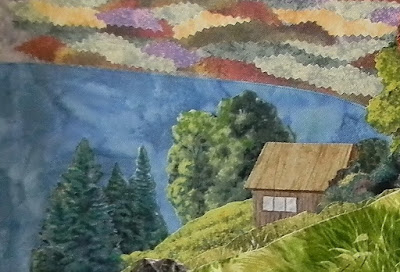 Next it was time to audition fabric for middle-ground and foreground meadow grass.

I'm switching to black-and-white photos at this point. One reason is to better illustrate, without the distraction of color, the difference between my original choice to use this large-scale grass print for both middle ground and foreground...

The other reason for using black-and-white photos is that I forgot to take the thread-painted trees off the quilt for the first photo. I'm not ready to show them in a color photo of the quilt top just yet, as their final position isn't quite decided.

Next up will probably be the birdhouse section. That will be constructed off-site, just as the cabin section was.

Off subject, finished an outfit for the Lucy drawer: 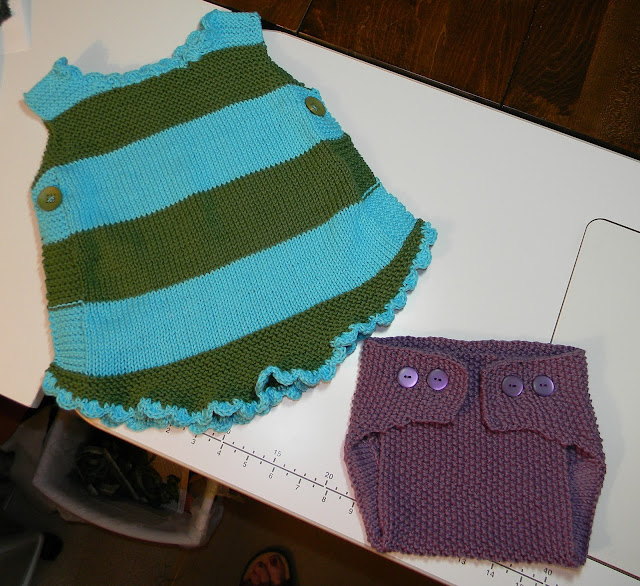 This is a swing-top and diaper cover knitted in Rowan Handknit Cotton. The outfit in the pattern book was made in three colors as well, just not these. My colors were chosen from a swatch chart on a yarn company's website, and when the yarn arrived I realized that only one of the colors, the turquoise, actually looks just like it did on the website. Hence, at first glance this color combo may look a little strange, but I've gotten used to it now. And Lucy won't care. Not yet, anyway.

Hooking up with Whoop Whoop Fridays, where Sarah has finished a wonderful photo quilt.

Everyone have a great weekend. And happy autumn!!

Linda
Posted by Linda Wulf Koenig at 9:40 PM 4 comments: Links to this post

Email ThisBlogThis!Share to TwitterShare to FacebookShare to Pinterest
Labels: The Overlook quilt

Out of the Woods

The last photo posted of the Overlook quilt was in the July 29 blog titled "Up a Tree." 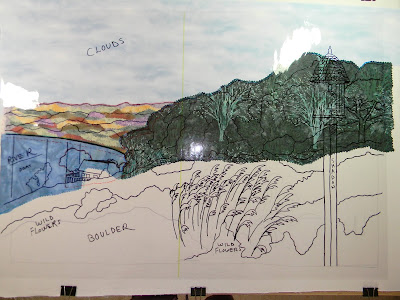 The title was more apt than I'd realized...or maybe self-fulfilling. After that, every time I thought about piecing the middle forest section, my brain just went in circles. (The dark-green fabric was merely background for whatever foliage would end up on top of it.) I couldn't just stick blobs of color in this area; it's too close up. The foliage would need some definition. But I didn't want to fill the section with thread-painting, either. Too labor intensive, and the base fabric would have to be stiffened tremendously to take that much stitching.

So I distracted myself with other projects, assuming a solution would soon occur. Trees were thread-painted, an all-thread landscape was quilted and bound, twenty blocks were cut and pieced for a donation quilt, and several items were knitted for Lucy.

All the while, the Overlook project waited patiently in the corner. I pretended this didn't bother me. At one point I even gave it a long, cool stare and said (in my head), "You know, I don't have to finish you. I can cut you up and use your parts to make other landscapes. And don't think I won't. I've done that before." This helped take some pressure off me, but the Overlook appeared unfazed by my grim observation. Nor did it offer any new inspiration.

Then, this past Saturday, after coming to a halt on the donation quilt (the backing isn't pieced yet), I found my shifty gaze wandering around the studio for some new diversion...and fixing on the Overlook project. Moments later, it was under construction again. 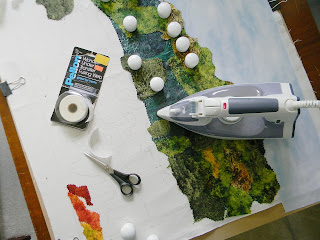 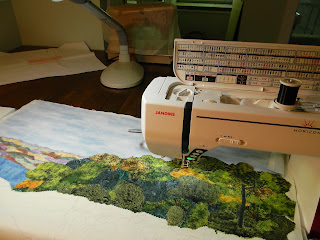 Yep. Can you believe it took five weeks of brain strain for this section to wind up covered with 'blobs' after all? In my defense, most of them look like well-defined foliage, as they're cut from some realistic tree fabrics.

After coming up with a decent arrangement, I tucked a bit of fusible web under the exposed edges of each little fabric piece. This saved me a couple of afternoons of gluing and then waiting for the glue to dry. Bye-bye glue sticks! Hello fusible web...why did I never think to do this before???

Not only that, but the fusing took place right there on the design board--a drawing board with big metal clips--which is made of thick, multi-layered, hard-pressed paper. (And it didn't warp, as no steam was used.) No need to transfer anything to the ironing board or pressing mat!

The white things are vinyl-covered, felt-bottomed lead weights from the 1980s, intended for cutting out sewing patterns without using pins. Very heavy for their size, they don't scoot or get knocked around easily, so fabric pieces are kept well in place until they're fused.

The raw edges were then quickly stitched down by machine, using a fine-weight, smoke-colored monofilament. (Bits of fusing are only good temporarily, as fabric pieces can still come loose with handling. The sooner they're stitched down, the better.) 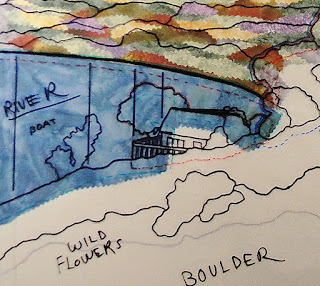 The next step will be making the cabin section, most likely off-site and constructed on a sheet of paper-backed fusible.

Oh! And those three trees that were thread-painted a few weeks back....

...they'll be placed on top of all the foliage pieces to give the forest a more defined finish. 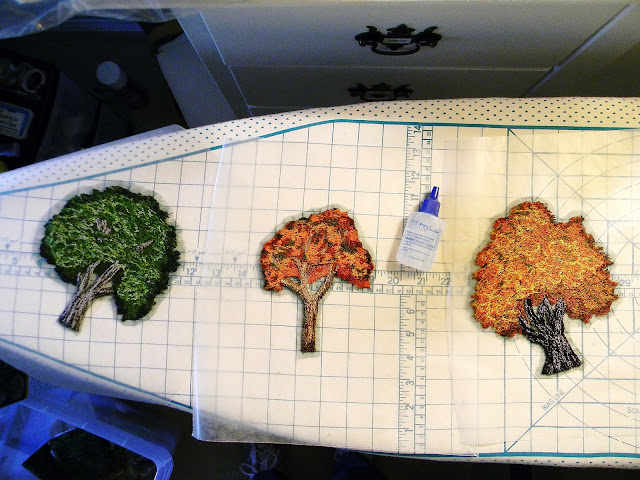 (The tree edges look dark here because they'd just been coated with Fray Check. When it dried, they lightened up again.)

Off subject, there's one more item for the Lucy drawer. I love this yarn!

Check out Sarah Craig's Whoop Whoop Fridays blog. She is trying out some solid cottons from RJR for the "What Shade Are You" blog hop, in a new quilt of her own beautiful design. And she's having a giveaway!

Linda
Posted by Linda Wulf Koenig at 3:16 PM 4 comments: Links to this post