99 Blocks of Beauty on the Wall

On to the point. In this case, a wedge point.

Anyone who regularly watches Fons and Porter's For the Love of Quilting show has probably seen the quilt called "String Me Along," by Dodi Lee Poulsen. (Click on that link to get the pattern.) This lively, colorful quilt really got my attention. 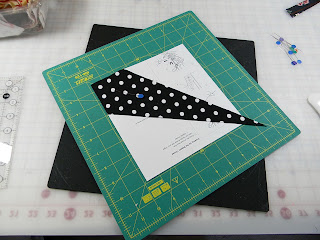 From two yards of a black and white polka-dot fabric, you cut wedge-shaped pieces that fit exactly in one corner of a foundation square (muslin, lightweight permanent stabilizer, tear-away stabilizer, or paper) and extend just through the opposite corner. (I used a 7-1/2 inch square, which is larger than the pattern. I cut my own wedge template and barely got all my wedges out of the yardage; in fact I had to shorten four of them. That's what I get for trying to guess at the directions before I bought the pattern--which I've now done.) 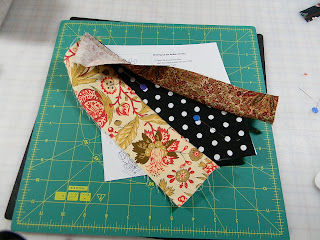 Then you sew a strip of fabric down each side of the wedge piece with a 1/4 inch seam, making sure each strip extends past the edges of the foundation square before you sew it down. Finger-press each seam away from the polka-dot fabric.

Keep adding strips to either side and finger-press the seams away from the center, until the square is completely covered.

TIP: If you are using paper for the foundation, which is what I did (it's a good way to recycle used printer paper) keep the paper on until the block is finished so you'll know how long your strips need to be, but don't sew through the paper after the first two seams. Just fold the paper back to sew the rest of the seams, unfolding it only to check the length of each additional strip.

You'll be glad you only sewed through it twice when it's time to tear the paper off--which is the next step. 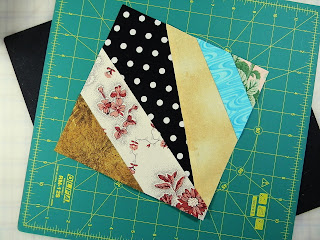 After that, trim your block by lining up a square ruler with the polka-dot corner.

Now is the time to press your block, with a dry iron.

UPDATE (correction): Reverse those last two instructions. I pressed the un-trimmed block nice and flat, THEN trimmed it.

I used up all kinds of scraps on this project, ending up with ninety-nine 7-1/2 inch square blocks, for a quilt that will be 63 x 77 inches. That's not quite according to directions in the pattern, which ends up with 96 slightly smaller blocks. I would strongly suggest using the pattern. It would have saved me some guess work and yardage shortage.

This is as far as it's come, but I'm liking the look of it. It isn't the same block arrangement shown in the pattern, and I've seen two other arrangements, as well, on the internet somewhere. All are lovely. 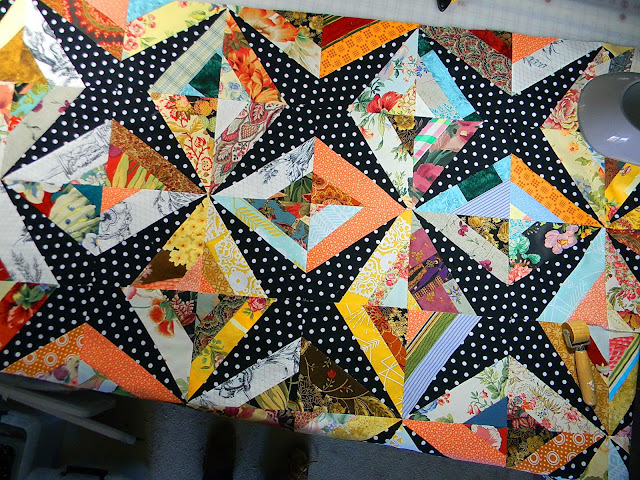 Just a note: When joining the blocks and the rows, I did press the seams open instead of to one side, and it was the only time I used steam. Pressing, not ironing.

Another tip: For quick preparation of paper foundation squares, use the square ruler you'll be using to trim your blocks AND a rotary cutter set aside only for paper. (I keep a used, dull blade in that one, as it cuts paper just fine--two squares at a time!) That rotating cutting mat is super helpful, too.

Have a great week. Spring is starting early here in Kentucky, and we are loving it!

Linda
Posted by Linda Wulf Koenig at 7:38 AM 4 comments:

This week saw the finish of a quilt made with the 21 squares from Island Batik's Seashore collection by Kathy Engle for Tamarinis, which were included in the November Quilty Box curated by Tammy Silvers.

All sashing was cut from my Hoffman batik stash.

The design is called Half-Square Triangle Variation, by Rita Hodge of Red Pepper Quilts, and is in The Quilters Planner 2017 by Stephanie Palmer.

For me, this is as close as it's come to working with triangles in a quilt project--something I've said I'll never do--and of course no triangles were actually cut or sewn here. Yay! And, whew!


Using the pre-cut squares, I was able to cut smaller squares that were still 1/4" larger than the pattern specifications. This only added 3 inches of width and 3-3/4 inches of length to the quilt, but I wanted it as large as possible without making the sashing any wider.

One of my favorite parts of planning the layout was arranging 1-inch paper copies of the blocks--all 168 of them, plus a dozen blocks cut from some undersea fabric in my stash, totaling the 180 blocks called for in the pattern (12 x 15 blocks)--on paper with a 1-inch grid (hand-penciled with my quilting ruler).

A photo of the final arrangement was taken for piecing order reference, and printed out on a full page. That worked really well for keeping track of the blocks as they were sewn together, because I'm very visual (aren't most quilters?) and for me this works better than choosing the right block from numbered stacks. (I am guaranteed to get something out of order doing it that way.) 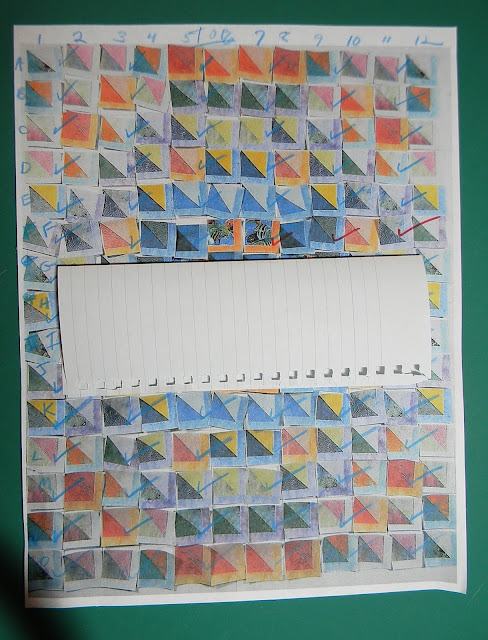 As the blocks were sewn together, they were checked off on the paper photo, and the white paper 'ruler' was moved down to the next row. And so on. 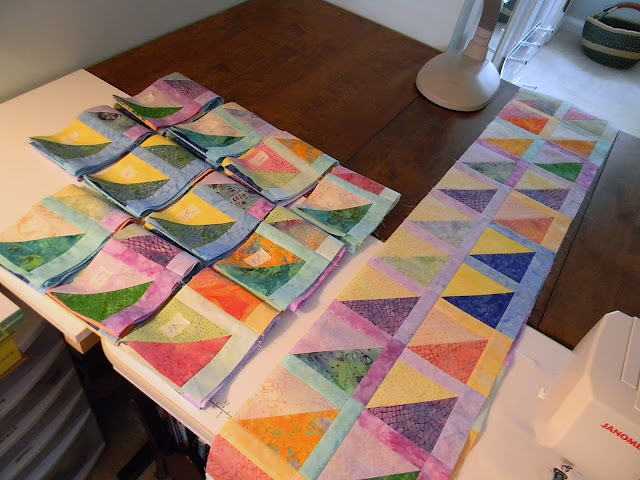 (I did letter each sewn row with one little piece of masking tape.)

All in all, this quilt was a quick one to piece. And there's no border...just binding.


This is probably headed for The Center for Women and Families. I'm thinking it might be a child's quilt, for a twin bed.

p.s. No doubt I'll wind up working with triangles at some point just because I said I woudn't. Also, after going to all the trouble of penciling a 1-inch grid with a ruler, I remembered I have a whole tablet of 1-inch grid paper. Doh! and Duh!
Posted by Linda Wulf Koenig at 2:12 PM 6 comments: