As of four days ago, my main sewing machine, the big one, has been in the shop for service for two months (hence the long silence on my blog). I can piece bed quilts--though not landscapes--on my vintage Singer. But no way can I quilt on it. My shoulders and neck have already signed, sealed and delivered that decree.

So, what do you do when you're a quilter and you can't quilt?

You design and piece like crazy. And because you're feeling a little crazy, or at least frustrated, some of your fill-in projects may go off the rails a little bit. (That's my story and I'm stickin' to it.)

1. Decided we needed a new Christmas quilt for the couch this year, and that I was not going to buy any new fabric for it.

Hindsight tells me this was perhaps less than wise.

Regardless, it's now sandwiched and waiting for the machine. (Warning: You're going to see that phrase again.)

At this point I could sign off and title this post "seeing red," both for the over-saturation of red in the quilt blocks and for the irritation of being without my machine. But no. There were more misadventures to come. 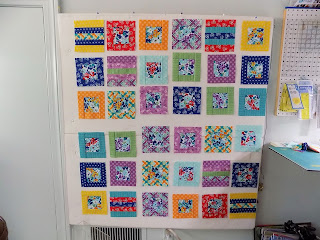 2. Came up with the bright idea of mixing and matching (?) squares and strips from the fat quarters in a recent Quilty Box selection--completely ignoring the fact that some of the combinations would be so tonally similar they'd barely be noticeable in a finished quilt...and that the ones made with remnants (the stripey ones) would look like flags from unheard-of countries. 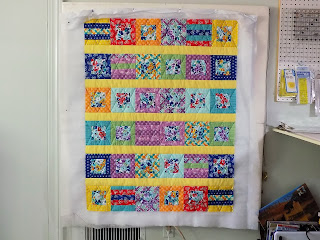 It looked somewhat better after adding some horizontal sashing (vertical would have made it too wide). Maybe a crib quilt?


Anyway, now it's sandwiched, and--you guess it--waiting for the machine.

3. Decided I'd gotten in enough trouble in the studio, so would head for the basement and paint some fabric for landscape quilts. I had done that once, and got a couple of decent pieces out of the lot I painted that day.

This time, not so much. 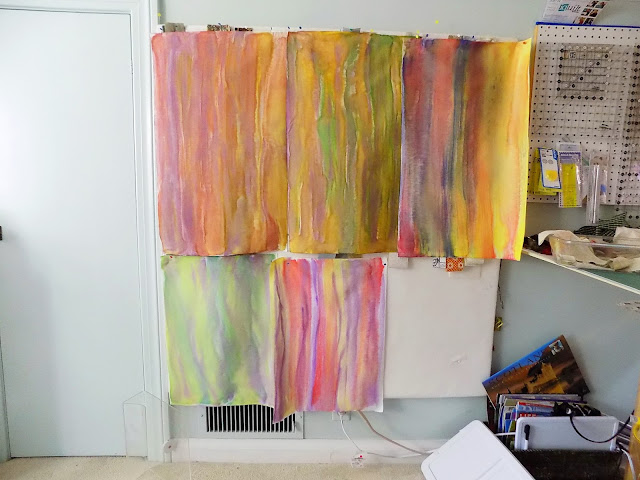 I would love to be able to say that my 2-year-old granddaughter painted these. The truth is, she could have done a better job.

Except maybe for this one--originally it was so bad that I scrunched it up and dried it in a wad, ending up with a far-better looking piece than what I'd started with. I like it, but don't ask me how I'd use it. 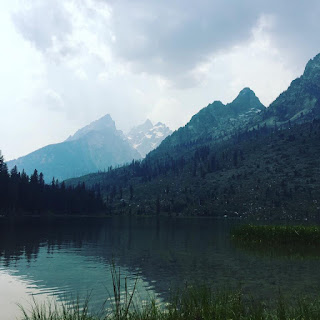 In the meantime, my daughter-in-law visited her family in Wyoming and came back, bless her, with this beautiful shot she'd taken at String Lake. So....

4. Decided this would be the inspiration for my next landscape, but that instead of using all realistic fabrics, I would use some of the batiks that were piling up on the shelf.

Not saying that was a bad idea. Just a bit different for me.


It progressed pretty quickly, from tracing to pattern-making to fusing to piecing to embellishing... 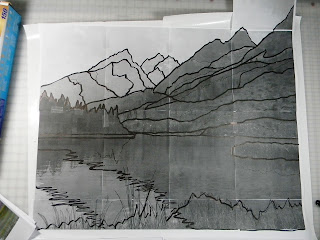 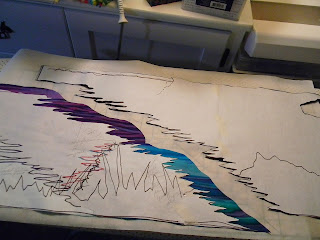 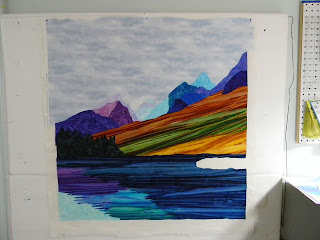 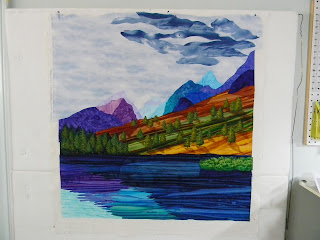 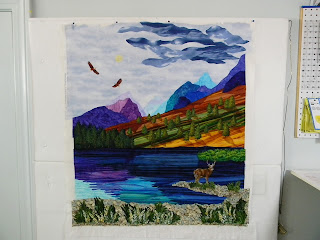 ...but not to basting. And why? All together now: Because it's waiting for the machine. :-/

We'll (eventually) see how this turns out with some thread embellishment and free motion quilting. Again, it's not my usual style of landscape, but I had a lot of fun piecing it. Thank you, Shannon.

Hoping next time to have some quilting to show.