...is finally finished, except for the hanging sleeve on the back. (Click on any photos to enlarge.)

And against all odds at first, the darker bare shrubs were included in the end. The one thing I don't like about that is that the bare white shrub is practically invisible by contrast. But during auditioning, it became obvious that the center shrub gave the quilt added depth (despite also adding a bit of clutter to the scene), while the dark shrub on the right actually helped draw my eye to the birdhouse. Since they each had something positive to contribute, they were allowed to stay.

Here is the original photo, taken a couple of years ago at the Overlook Restaurant in Leavenworth, Indiana. You can see that some changes were made, due to 'artistic license' (mostly simplifying). 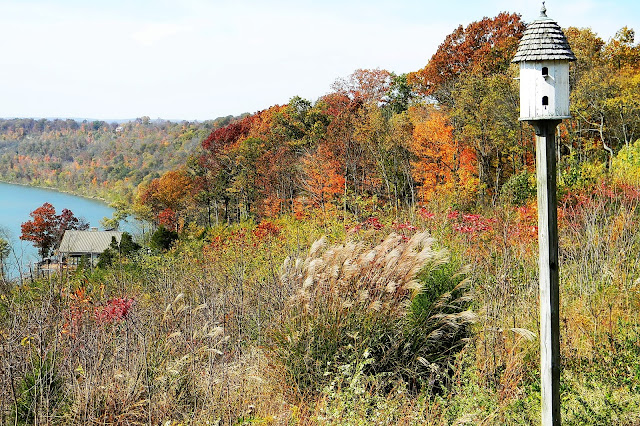 But there's some botanical license here, as well. A good bit of the meadow had browned out, as you can see, since autumn had arrived. However, my brown grass fabrics looked dull and out-of-scale for this middle ground and foreground. And we're not even going to discuss whether or not my flowers should really be there! Also, for weeks I'd debated on how to stitch that gorgeous clump of ornamental grass in the center of the photo. After nearly deciding to do it with bobbin work, on impulse I auditioned all the green grass fabrics instead. I liked them so much that the ornamental grass clump went out the (metaphorical) window. Earth science be darned, I would have my green meadow and my autumn leaves! Besides, some of the trees in the photo were still green, and much of the red foliage in the photo wasn't included in the quilt anyway. So, I'm thinking the quilt scene is about two weeks behind the photo scene, season-wise. Yep. That's my story and I'm stickin' to it. ;)

My real point here is that if it's your landscape quilt, you're the boss. Nature is somewhat (or totally!) at your mercy.

Here are some closeups.

Here are a couple of photos where the quilting is more obvious.

Off subject: Speaking of autumn, just had to include a couple of Halloween photos here.... 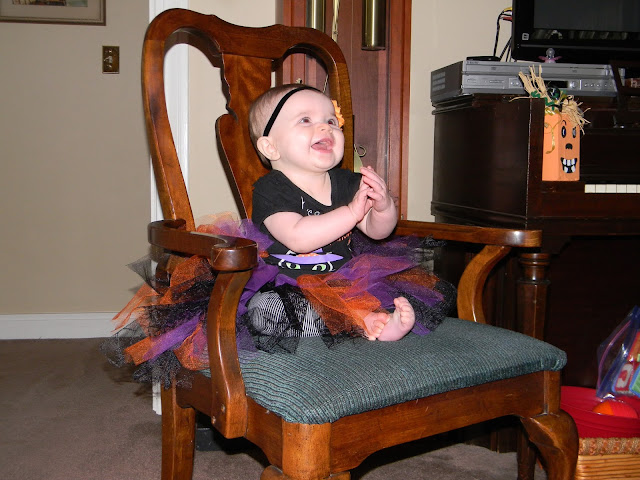 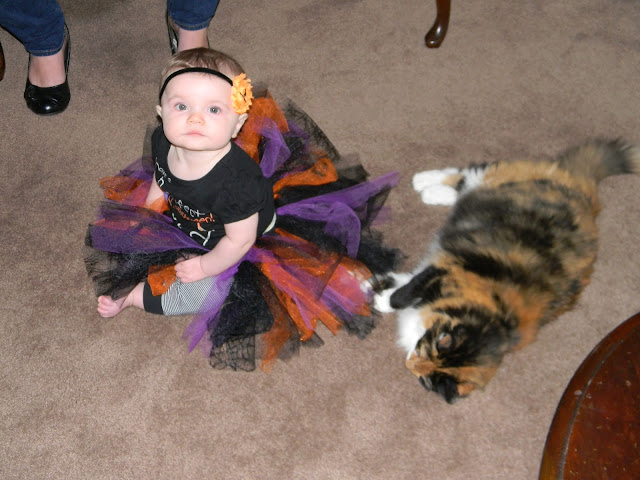 This is Lucy, my sweet, only grandchild and the recipient of all items made to go in the often mentioned 'Lucy drawer.' She did not go trick-or-treating, as she is eating only pureed fruit/vegetables and teething crackers at this stage, but she seemed to enjoy being dressed for the occasion. (And Zoe, our diva cat, wanted that tutu now.)

Hooking up with Whoop Whoop Fridays. Check out the beautiful quilts going to Ethiopia!

Have a great weekend,