This month has been a blur...or is it just me? That said, there's been some progress...

The free-motion thread landscape is done, except for a hanging sleeve. Some birds in the sky (or a pteranodon) might be nice, though. A boat was considered but just didn't happen.

Again, a shout-out to Muv at Free Motion Mavericks for the inspiration to try an all-thread landscape. It was a refreshing change from the painfully slow progress on my Overlook landscape. 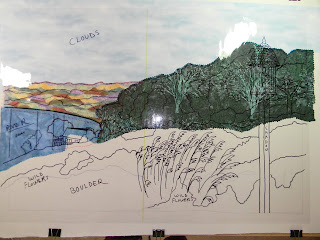 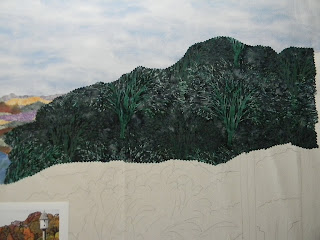 After days of fighting with the water section a while back, the green forest background had me stymied, too. Finally realizing, first of all, that the tree pattern in the green batik was distracting the heck out of me in my attempt to plan the actual trees I wanted there, I marched to the Sharpie drawer.


So much for the tree pattern. One problem solved.

But that was the easy one. I still didn't know how I was going to make my trees. My dubious plan was to fill most of the background with some fussy-cut fabric pieces and some machine-embroidered trees--which I had never even tried making. The only landscape element I'd ever machine-embroidered was bare-limbed shrubbery, using Alison Holt's method. 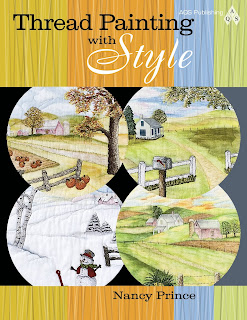 For this project I wanted full trees. I would get some practice at a new process, hopefully get comfortable with it (and at least halfway decent at it), and in the meantime, maybe some other inspiration would strike.

This time I reached for Nancy Prince's book. Both she and Alison thread-paint (machine-embroider) amazing trees.

The hoop was prepared using Nancy's method, which is two layers of tulle sandwiched between two layers of water-soluble stabilizer. This is dark-green tulle, which should blend into the background on my quilt. (Note: Nancy does not leave tulle around the finished edges, but I didn't want heavy stitching on the outer edges of my tree foliage, and therefore needed something to keep my edge stitches intact.) The tree was drawn directly on the stabilizer with a black Sharpie and a water-soluble marking pen. 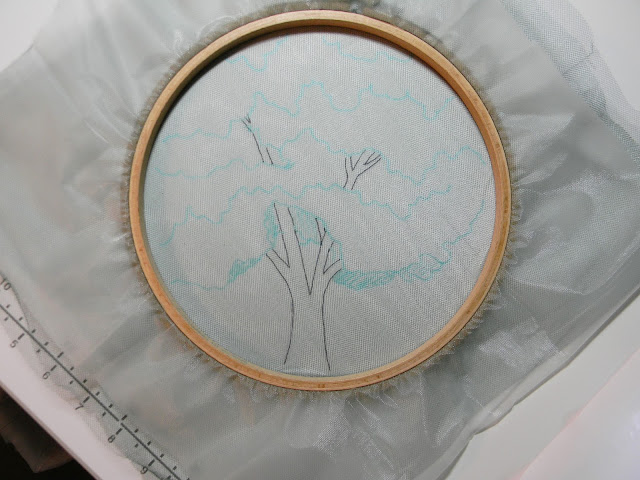 Since I wanted to use heavy threads for the trunk and some of the darker under-foliage, I wound those on bobbins and stitched in free motion from the back (below) with a lighter-weight thread in the needle. 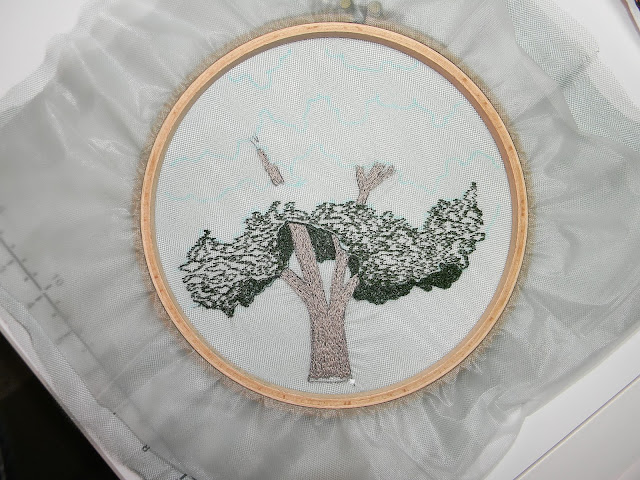 About 3/4 of the way through, the work was taken out, flipped, and re-hooped, after which lighter-weight threads in mid-tones and highlights were stitched directly on the front. Too many, I think...it needs more dark areas, as you can tell below.

This is the finished tree already cut out, rinsed, blocked and dried. You can see how heavy the bobbin thread was for the trunk (size 30, variegated cotton). Update--it is size 20, not 30. 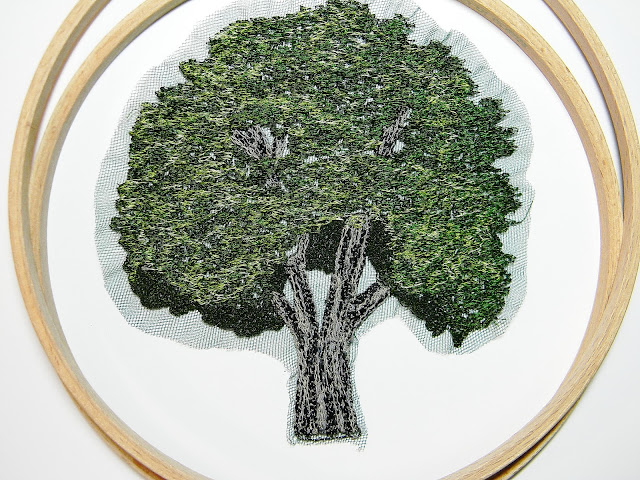 Confession: that was not the first tree, but the second. Below is the first one. 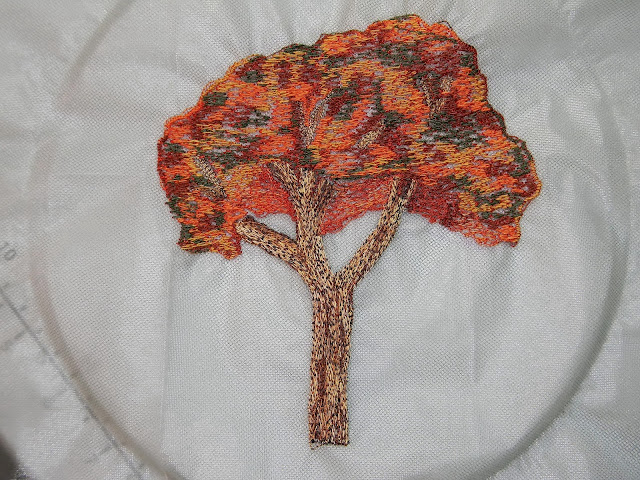 Yeah. Turns out there was more orange than I realized, in this variegated thread. And the more I look at it, the foliage appears to be draped over the branches in one big piece, like some sort of camouflage mosquito-netting. Poor tree! Maybe it's not so bad for a first attempt, though, and I can carefully try to tone down the orange with some paint markers. The trunk will need some shading, too--which you're supposed to do with yet another shade of thread in this method, but markers will work for that, too.

Off subject, here's one of three new garments for the Lucy drawer. 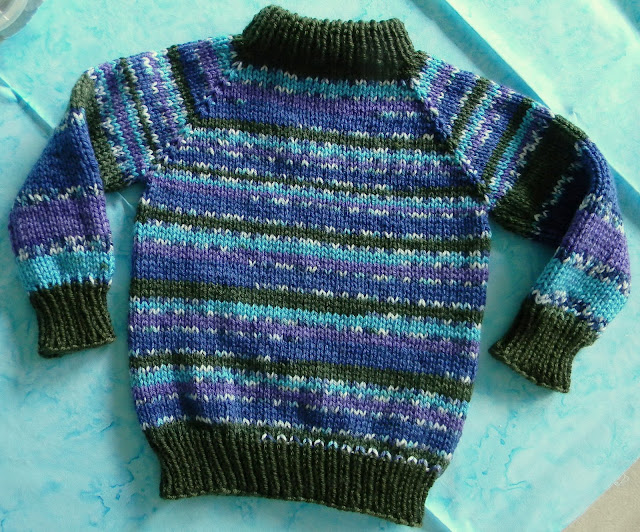 Except for the ribbing, this one was knitted (from the neck down) with a single, variegated yarn, Deborah Norville Everyday in the color Cold Mountain. Working from the neck down, the stripey patterns are automatically matched (except where a new ball of yarn is joined--although that worked out pretty well here), and there are no seams at the end! Why I waited 40 years to try this method is a mystery to me. A creature of habit, I suppose. And double-pointed needles (sleeves only) tend to slow me down considerably.

Linking up with Free Motion Mavericks. It's the last week for the giveaway over there, so hurry and check it out! Also hooking up with Whoop Whoop Fridays, where you'll see a vintage wedding dress makeover. Wow!

Might as well wish everyone a great August at this point. Seriously, where did July go???