Everything Plus the Girl

Drum roll, please...oh heck, forget the drum roll and bring out the trumpets! This week, after 6 months of designing, piecing, gluing, fusing, embellishing and quilting, the freshly blocked garrison quilt was squared, trimmed, bound, sleeved (is that a word?), titled and labeled.

Then, for the last time, the girl came out of her drawer. By Tuesday afternoon, she was gliding up the cobblestone path to the castle garrison. (Did you ever try to glide on cobblestones? :)


First, though, she was hand-basted through countless layers of fabric and fusible to keep her firmly in place for free-motion machine applique. Otherwise, her skirt could easily have ended up out of alignment with its shadow, and (horrors!) her entire body could have leaned to one side.

The main challenge was the thickness of the fabric. Counting the girl's 3 to 4 layers, there was a total of up to 10 layers of fabric under the needle. Not even the darning foot in its highest position was high enough. Time to go footless. 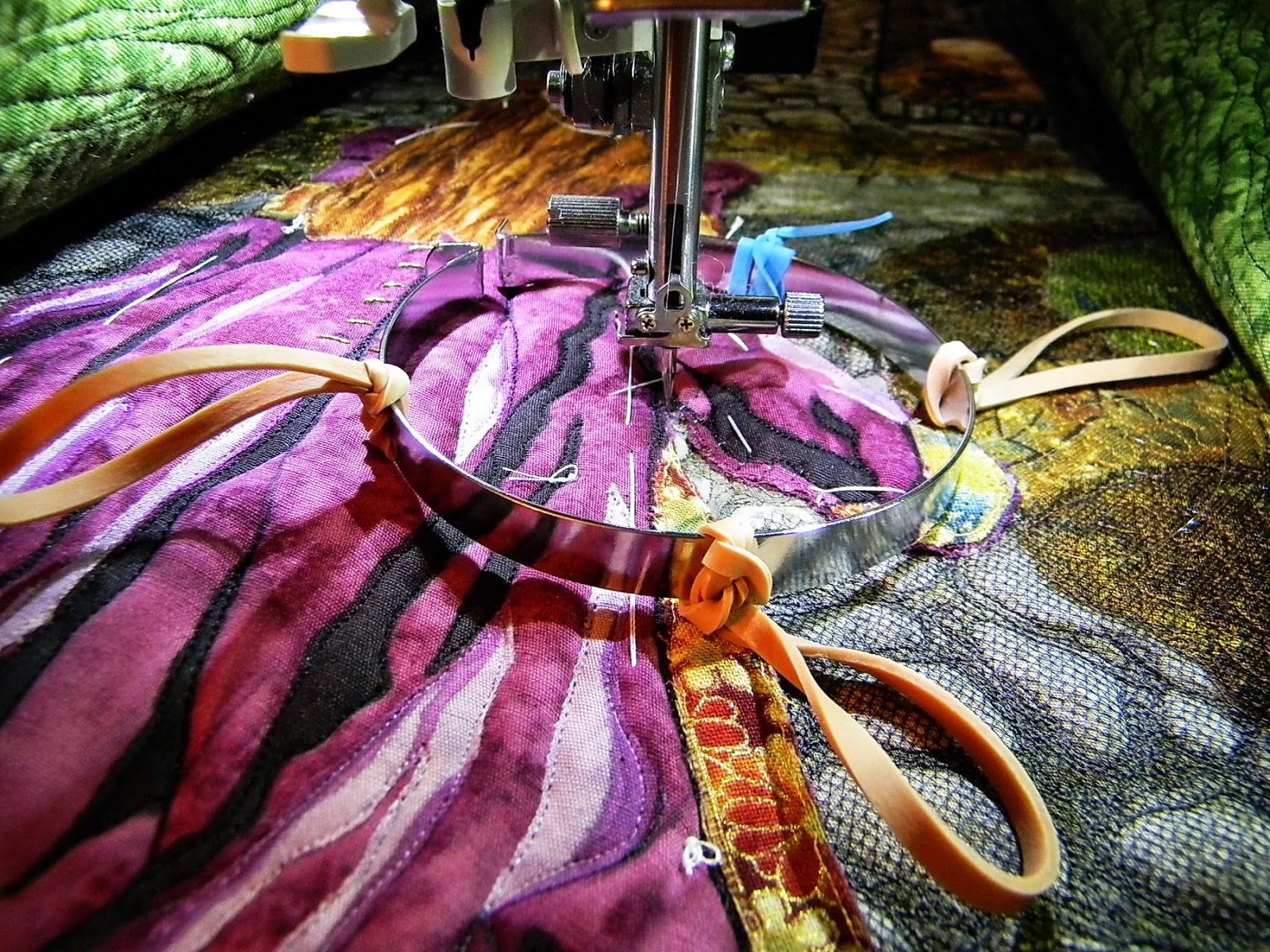 If you've ever done that, you know the fabric bounces with each up-and-down motion of the needle. This causes skipped stitches--especially with mono-poly thread, which I was using on top. (Note: my Janome dealer advised me to use mono-poly only when truly necessary. This is the first time I've used it on this machine. Sulky brand is very fine and flexible, unlike the old 'fishing line' mono-poly.) To counteract the bouncing and protect my fingers, I tried using my smallest embroidery hoop (not shown), but it wasn't close enough to the needle to stop the bouncing.

Then I remembered these little guys: 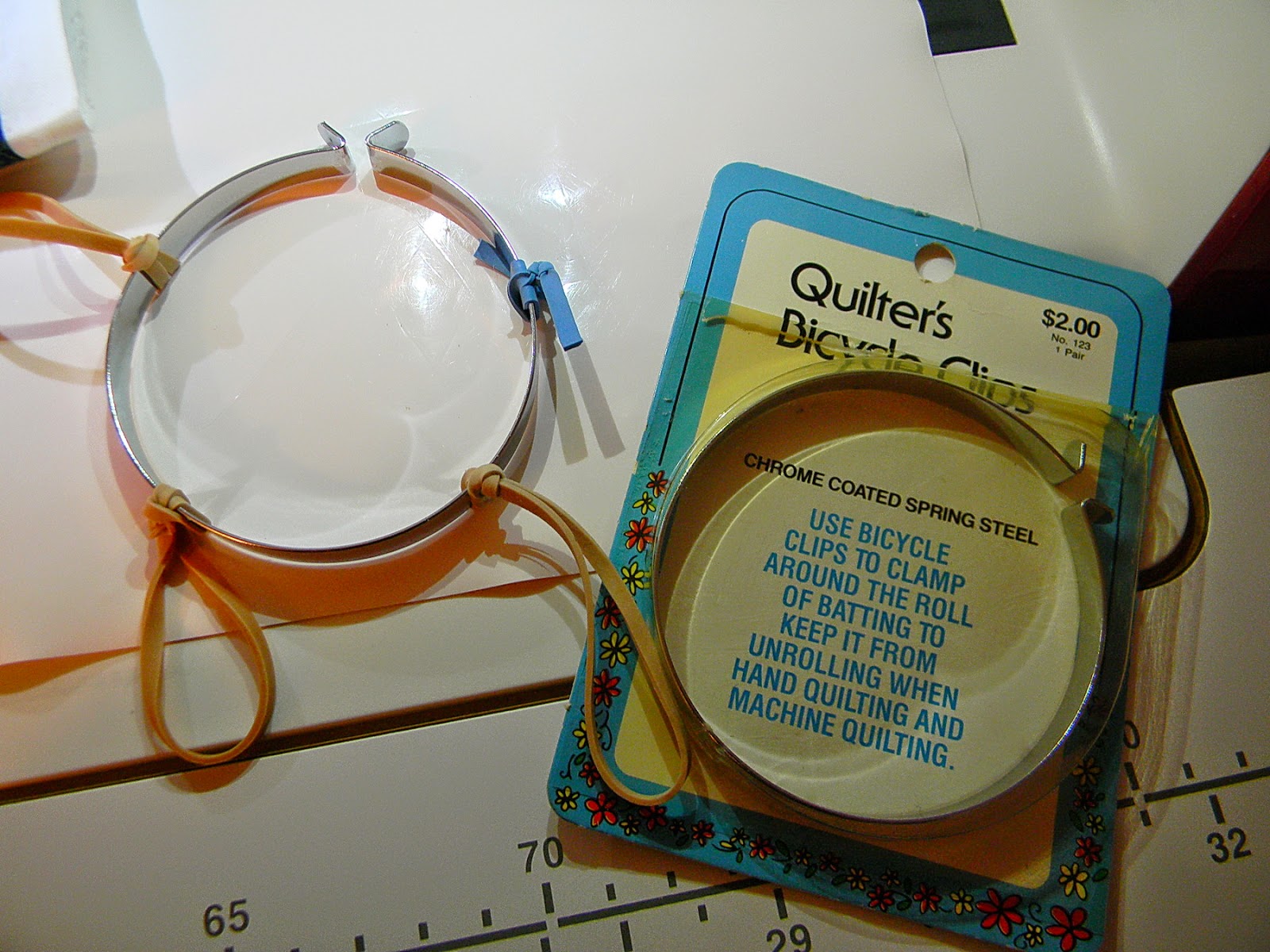 Honestly, I've never liked them very much for their intended purpose, which is clamping around a rolled quilt at the machine--they're too little! However, after knotting 4 rubber bands around one of them, it became a nice, grippy 3-inch 'hoop,' holding the fabric down reasonably well around the needle AND giving me a hand-hold, which helped keep my fingers away from the needle. Pushing gently down on the little hoop also helped me slide the fabric on the machine bed during the free-motion applique.


And now she's ready for her close-up, Mr. DeMille: 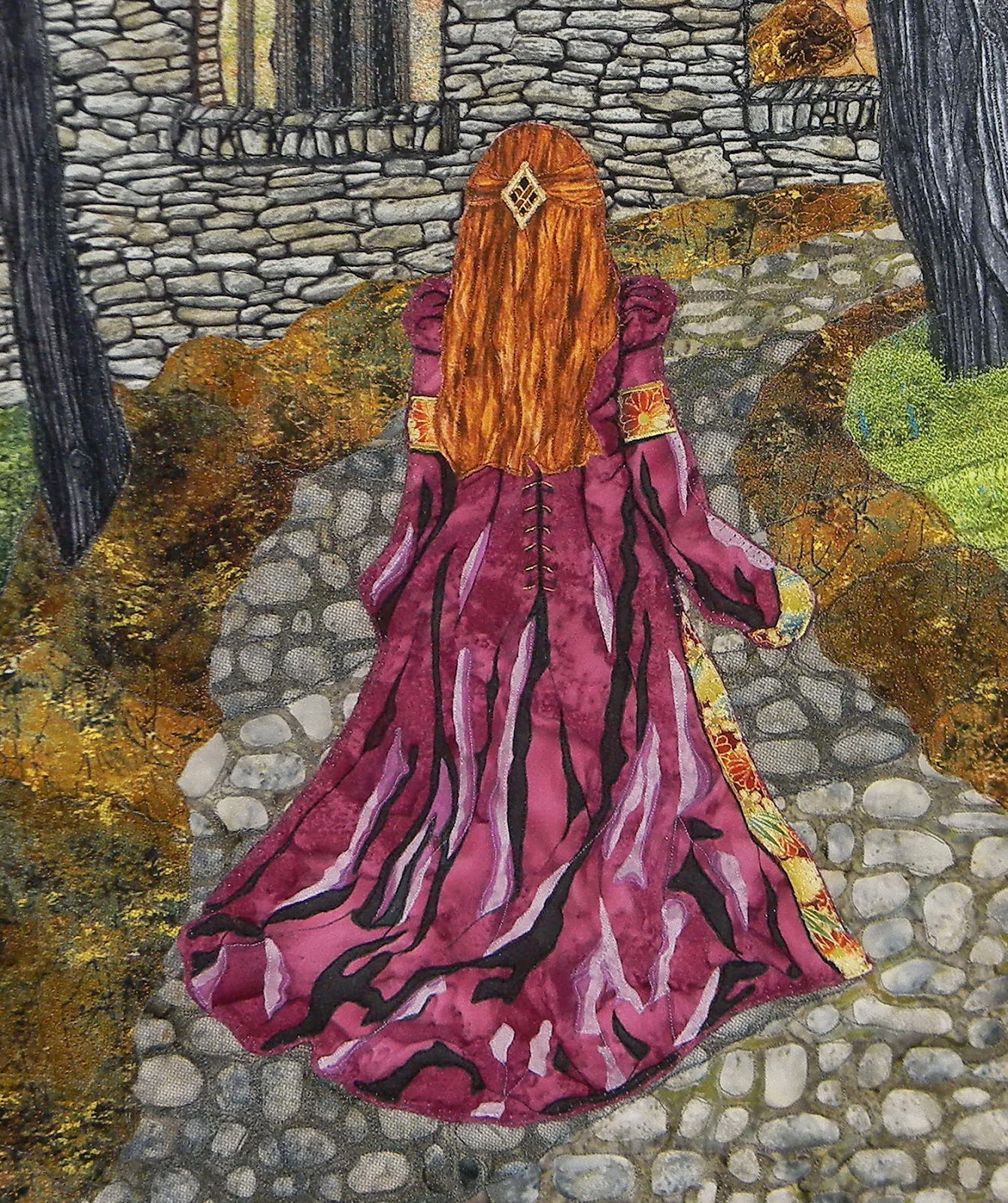 She actually looks much more padded than that, as she has her own batting under the dress and hair. The next photo, while a bit blurry, captures the resulting texture a little better: 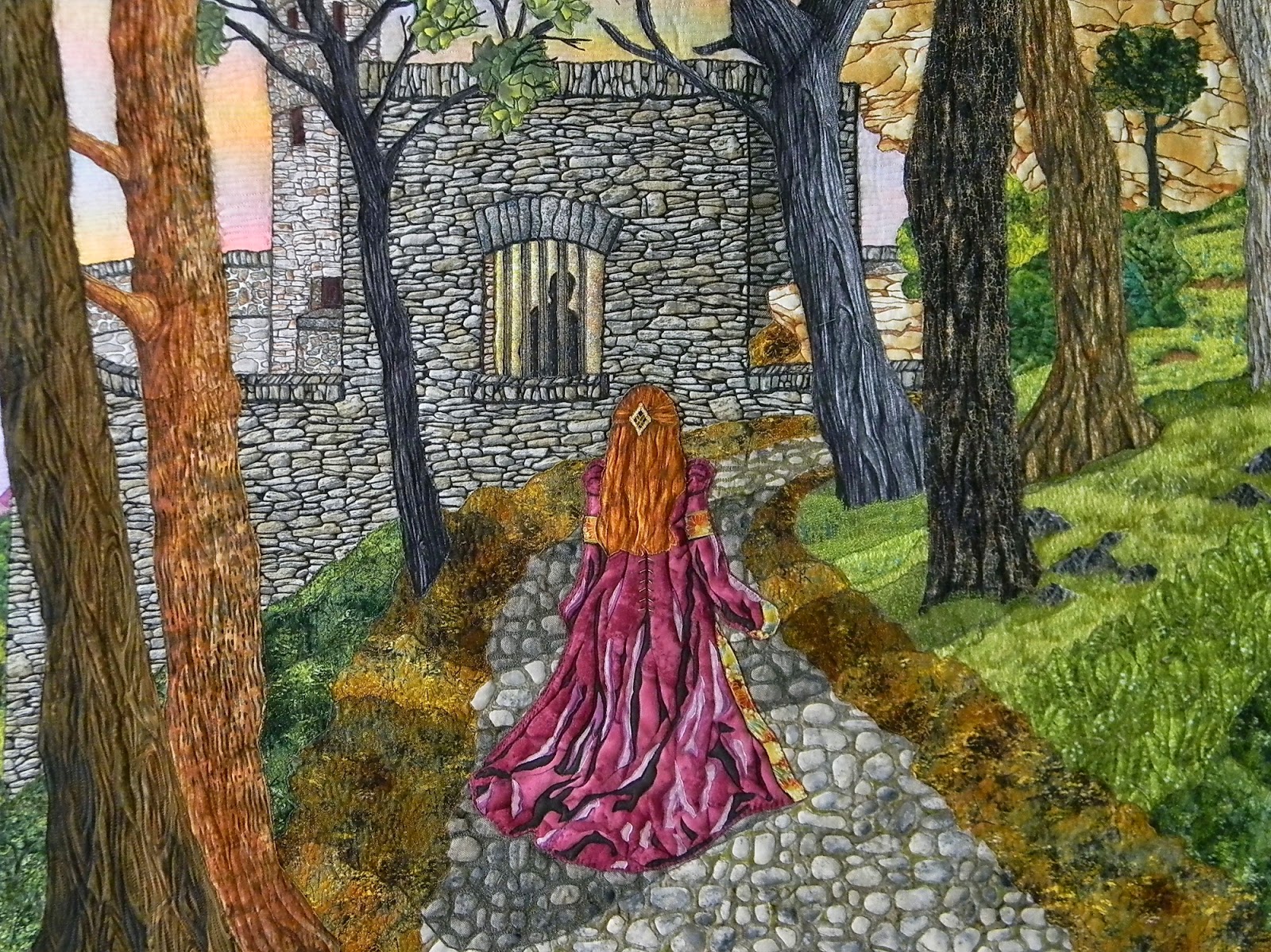 Below is the back (obviously) of the quilt...


The photo that inspired the quilt, taken by VVHH (very versatile handy husband), was shown in a previous post; here it is again: 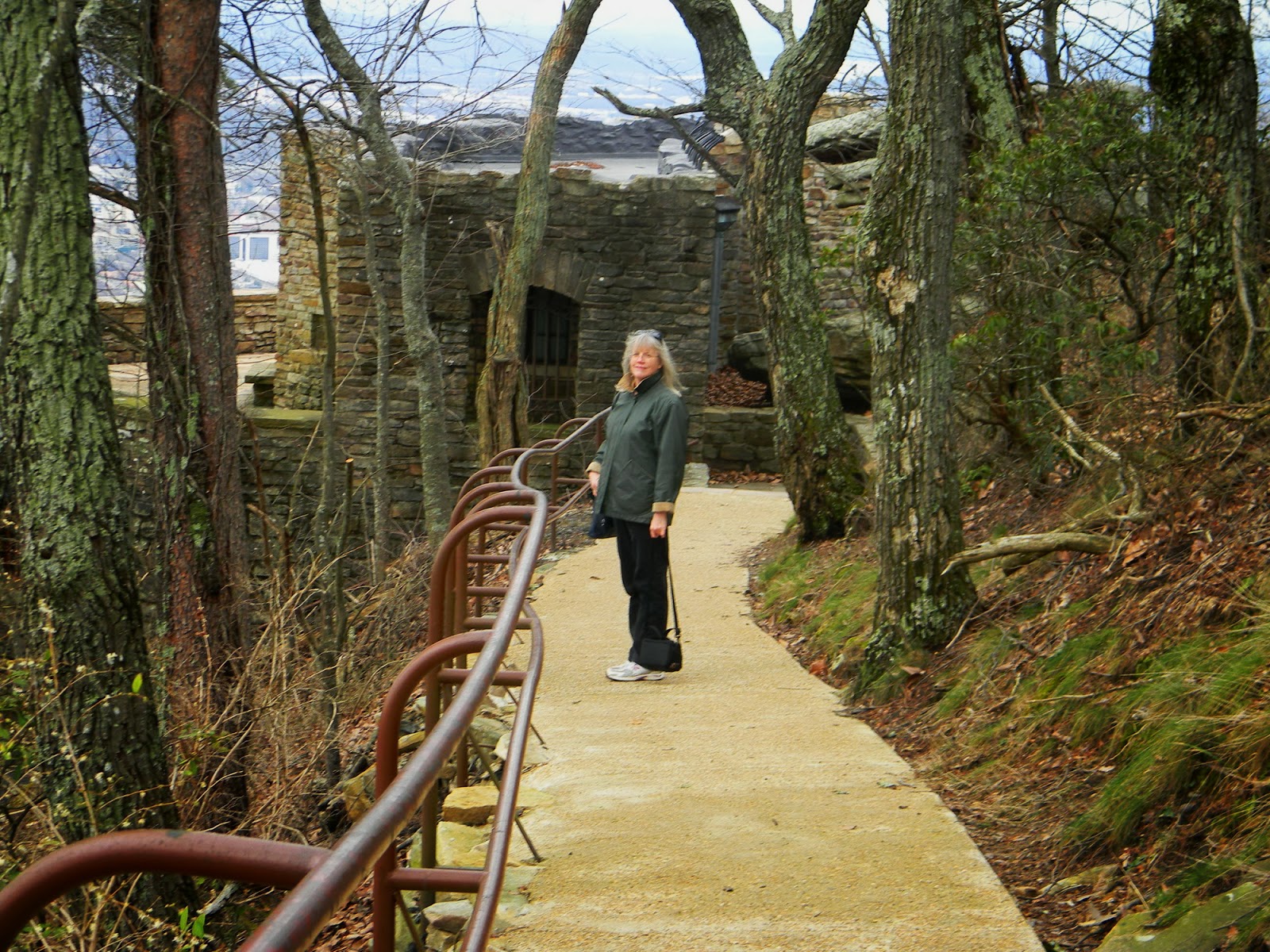 As you can see in the label photo, the railing and yours truly were digitally removed. Later, the cropped figure of Marjolein (shown next to the close-up of the girl, above) was dropped into the scene. By the way, in case you're wondering, her face is absolutely lovely! 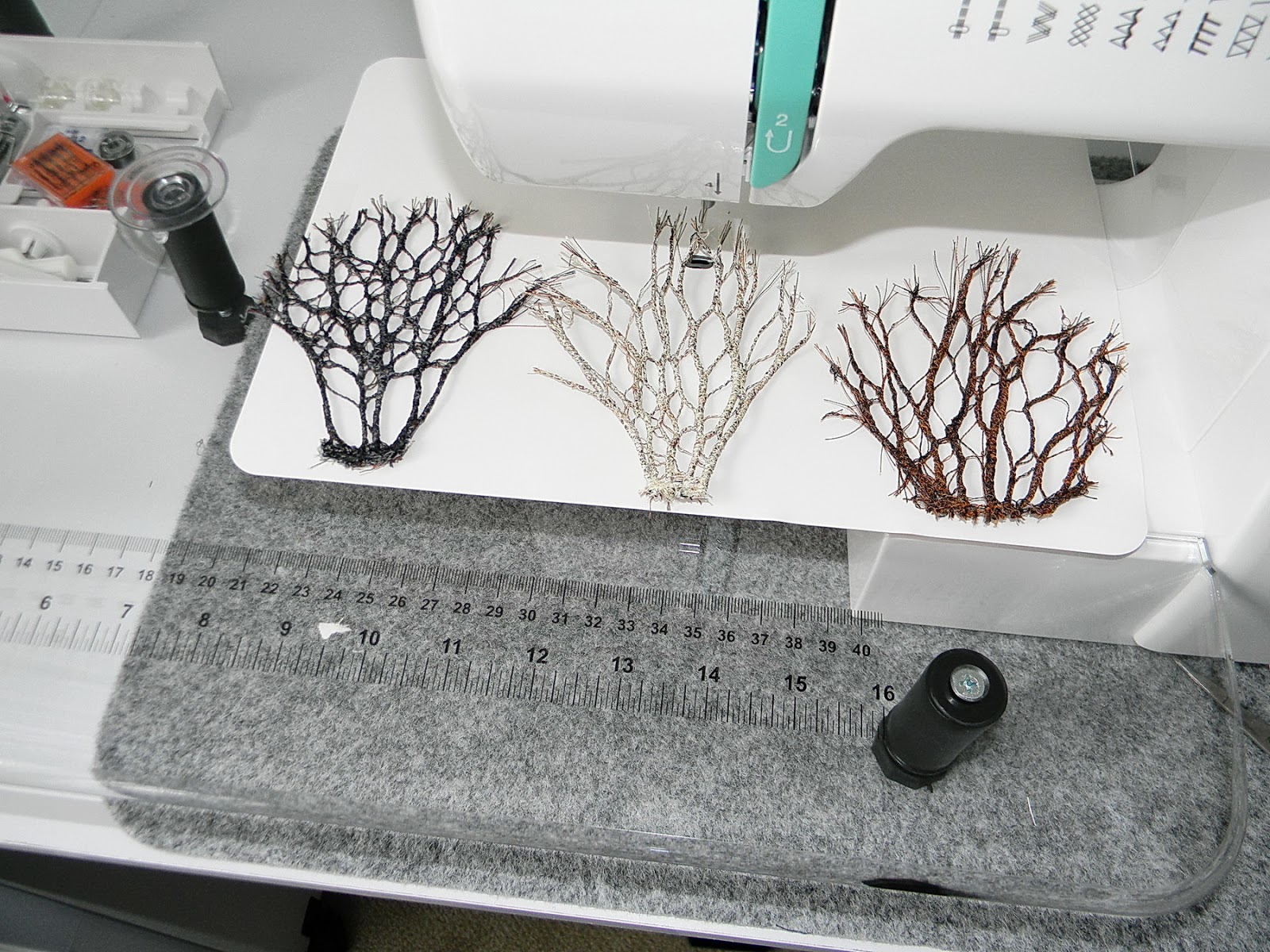 You may have noticed by now that the embroidered shrubs shown in this photo were not included after all. There were several reasons for that, but they'll be used in later quilts. As quilters know, nothing's ever wasted! That goes for landscape quilting, too.

A couple of goodies from the Universe this week: 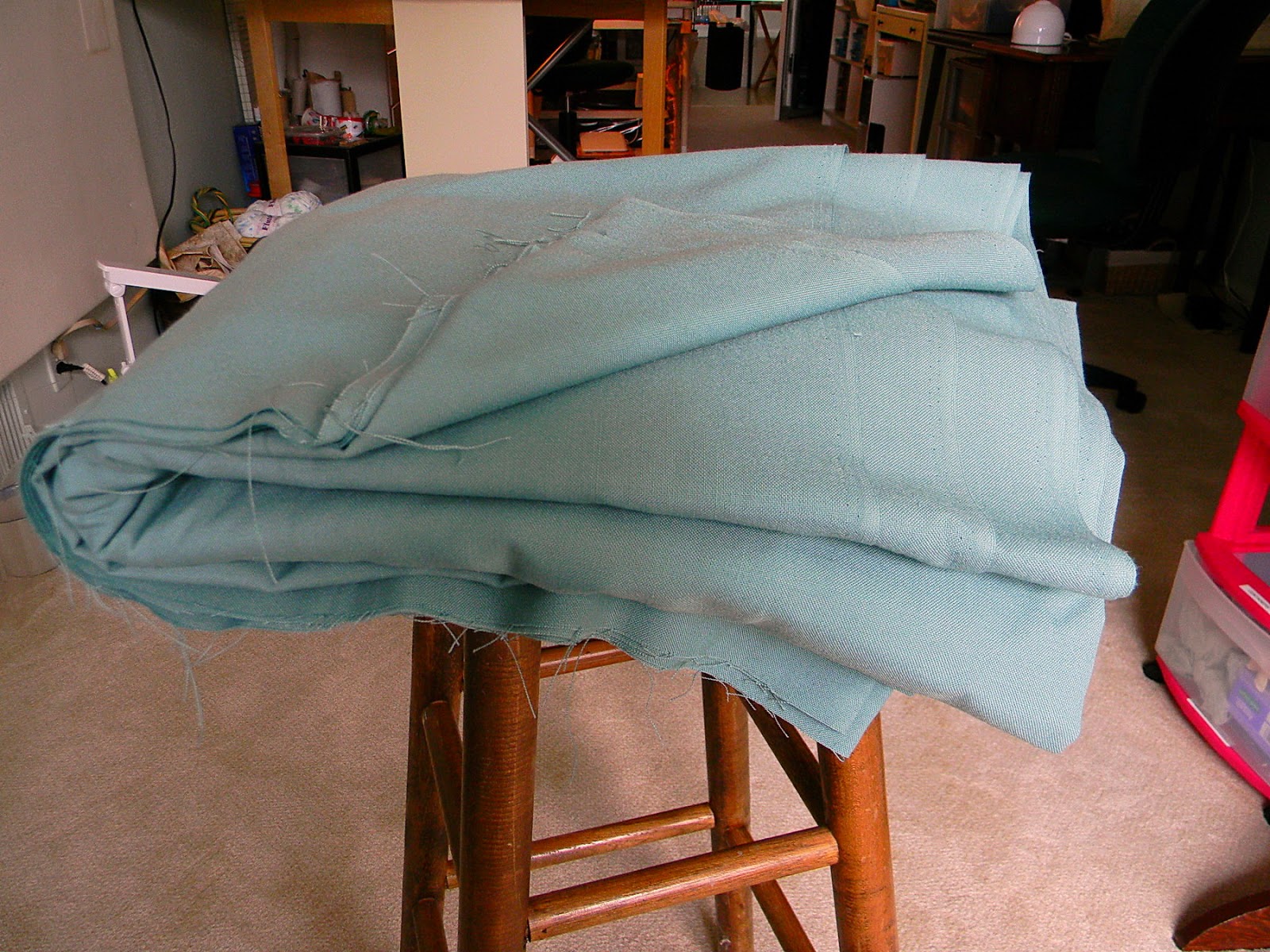 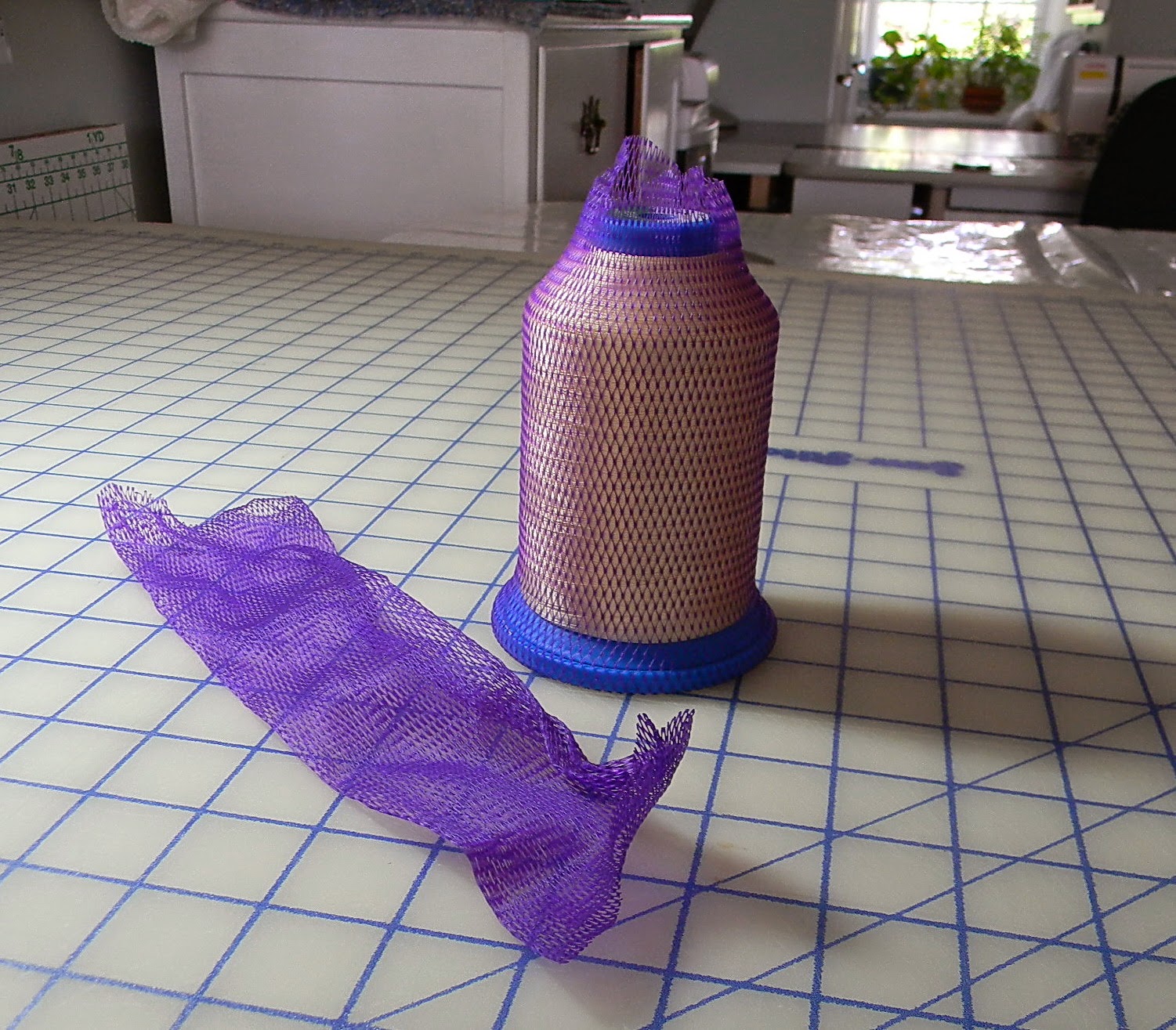 Five yards of a gorgeous cotton-poly blend found in storage downstairs. Probably been there about 4 years, and totally forgotten until now. It's the perfect fabric for the joining strips I'll be needing for the quilt-as-you-go blocks.


A purple plastic-netting bag my friend Kathy brought me the other day. It came with onions in it (or maybe shallots)--and a portion of it fits beautifully over this 5000m spool of thread.


Okay, I've just got to do this cropped version of The Visit before I sign off.  :)  (By the way, for those of you who haven't visited here before, the title of this post, Everything Plus the Girl, is a sequel to a post months ago, titled Everything BUT the Girl.) 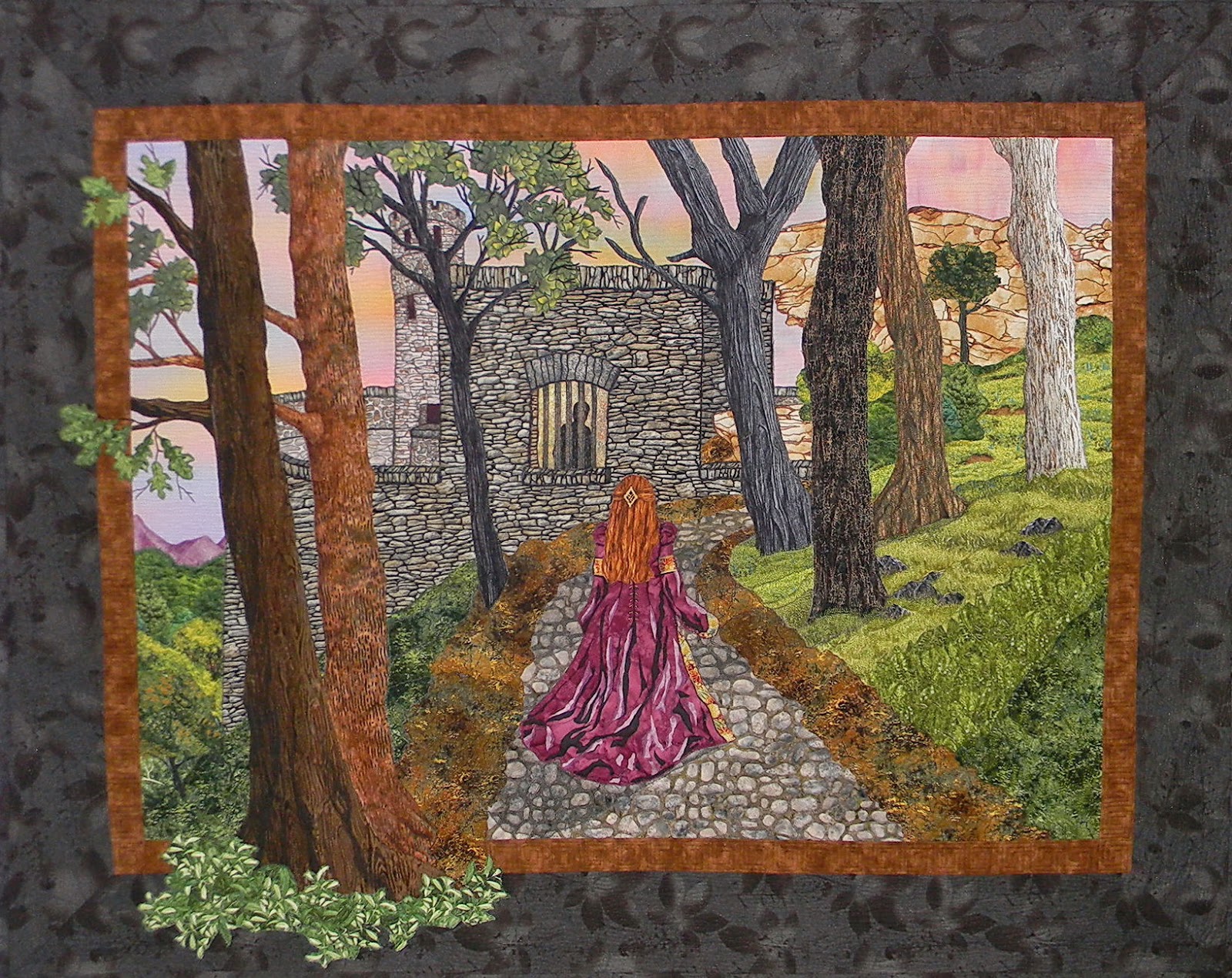 Linking up here with Sarah Craig's Whoop Whoop Friday, where she has had two big finishes this week. Also hooking up with Leah Day's FMQ Project Linkup, where her lovely Quilt Me fabric from Spoonflower has arrived. She has some other good news, too.

Signing off for now. Everyone have a great weekend. We're having our Dogwood Festival here this weekend, but they're everywhere, along with so many other gorgeous blossoming trees. Enjoy!