This week saw the finish of the aster quilt -- except for a hanging sleeve and a label. As the quilt is 54 inches wide, the sleeve will be attached in two parts, in case the hanging rod has a center bracket.

There's no place in my house to hang the quilt for a straight-on photograph, but this angle at least shows the quilted texture fairly well.

The blue jay was originally meant to stand next to the oak leaf--which is supposed to be lying on the ground (in an 'artistic license' sort of way). After all, the lower orange/brown/gold area represents the middle ground, covered in fallen leaves.

However, the oak leaf, despite its accompanying shadow and all my middle-ground stitching, still appears to be floating down toward the foreground (see caption under photo). Consequently, when the jay was positioned next to the leaf as planned, he appeared to be perched in mid-air! So instead, he has ended up in the only spot that makes any sense, all things considered; however, he looks a little disoriented now that he's no longer focusing on what might be under that leaf. Maybe there's a nut or a seed on the (brown) ground we can't see. I'm tempted to applique one. So maybe this quilt isn't quite finished after all!

The back turned out fairly nice. Not that it's any big deal, but I do like the texture. 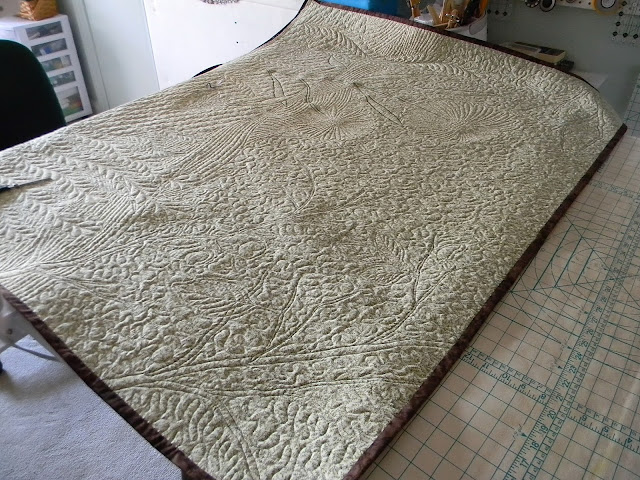 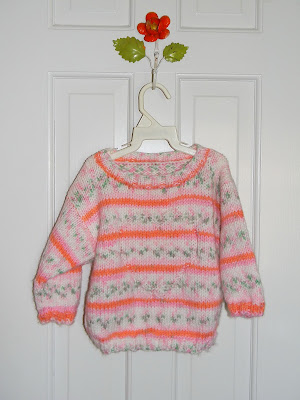 OFF SUBJECT: Finished another item for the Lucy drawer. This is made from another self-striping/patterning yarn from Deborah Norville's Serenity Baby line. 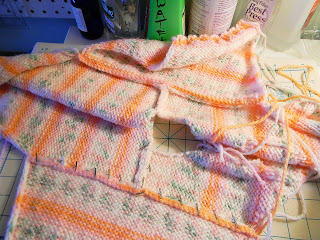 Because of the way the drop-style sleeves are attached to the sweater, the seams at first looked very bulky. So although this is acrylic yarn and not wool, I blocked the seams. T-pins, a lightweight press cloth and a steam iron were used, with only very slight pressure. (The side seams weren't sewn yet, so it all lay nice and flat.) 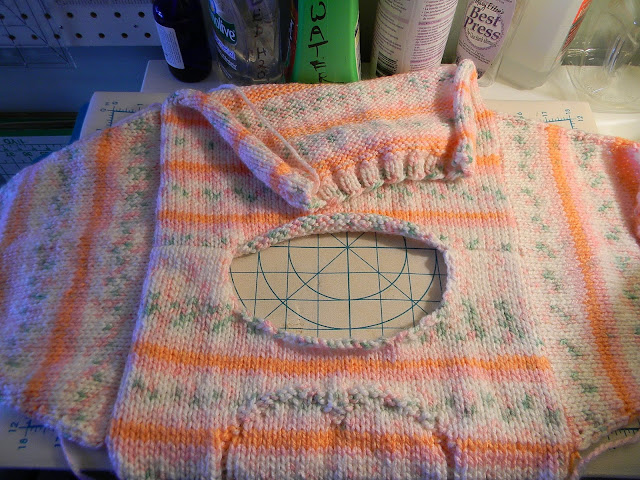 This turned out to be a good call. Compare the un-blocked sleeve-cap seam at left to the already blocked seam at right. The bad lighting exaggerates the difference somewhat, but only a little.

Next week I'll have a new, smaller landscape quilt to show (UPDATE: the winter scene from the last blog post! How sad is it that's it's been so long, I forgot I'd already shown it in progress?), a sort of fantasy scene including horses. I've been working on it during necessary breaks from the aster quilt (during blocking, etc.).

Linking up with Free Motion Mavericks, as most of the aster quilt was quilted in free motion. Check out the blog! Also linking up with Whoop Whoop Fridays. Take a look at the new solid fabrics!