...and something for winter of 2015-16! The little hooded sweater pictured below is for my granddaughter, and was just finished this week. (As always, click on any photo to enlarge.) 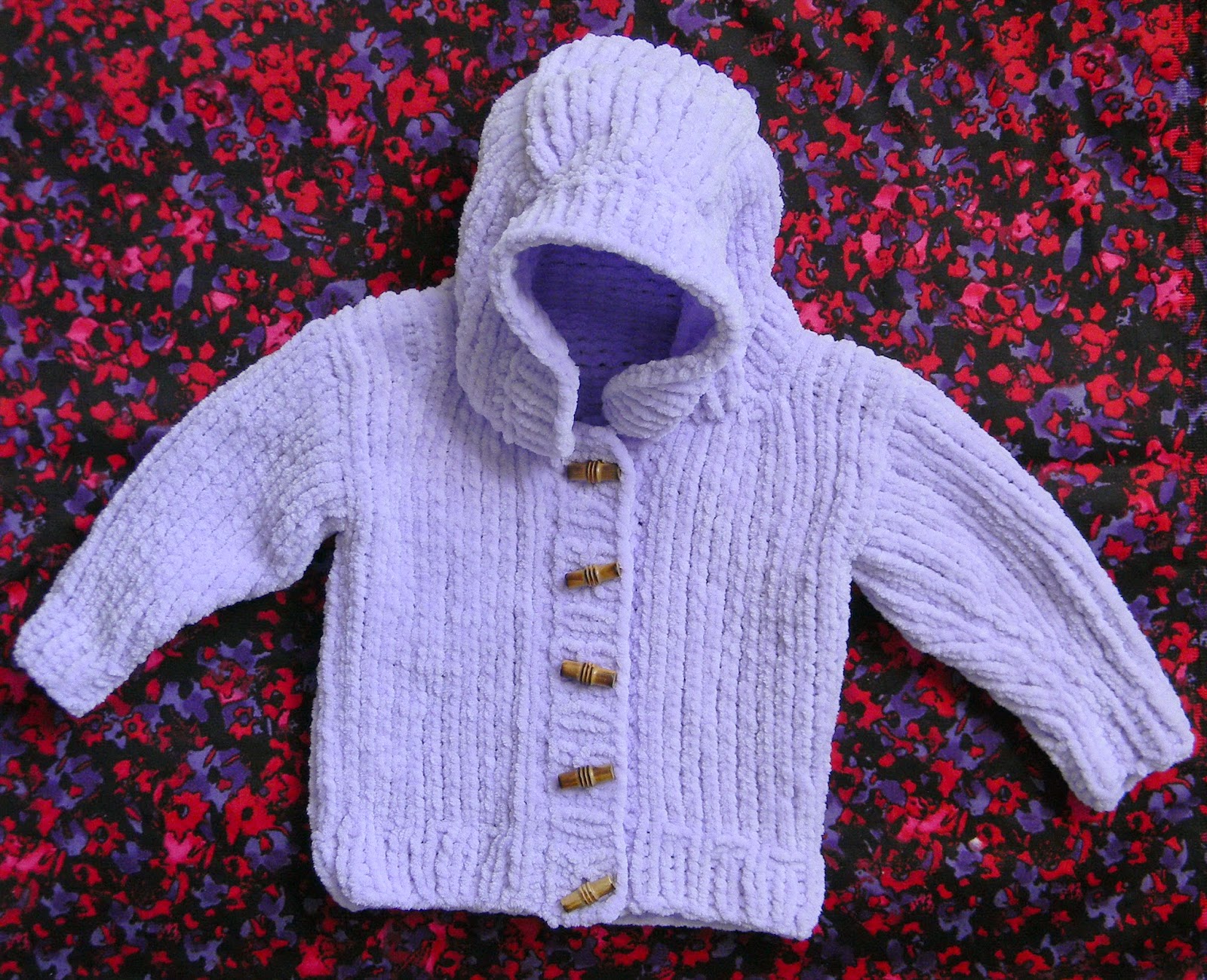 This was made with the same yarn as Lucy's baby blanket--Flutterby Chunky by James C. Brett. It's by far the softest yarn I've ever found in my 44 years of knitting. 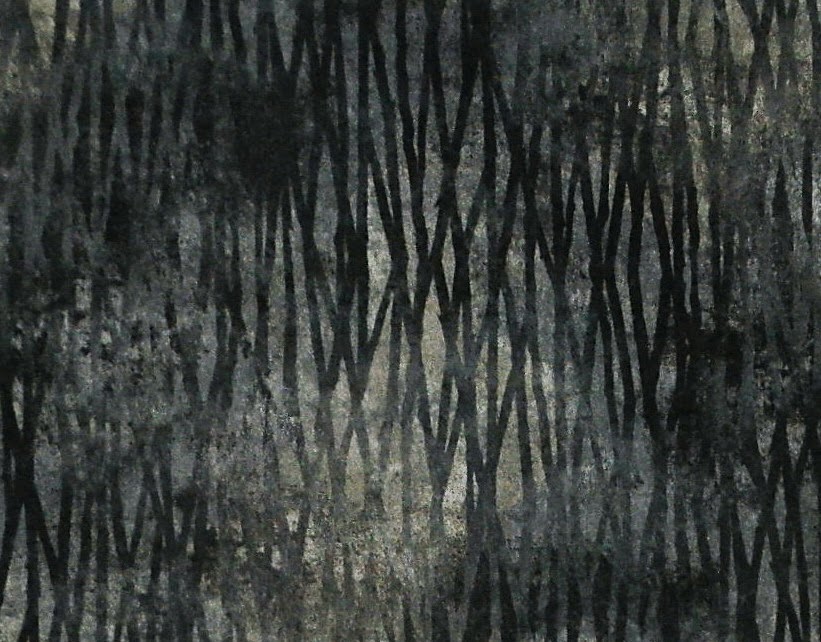 This second just-finished project is something that's been in the works for several weeks now (it was winter when I started), between other projects. It began with this piece of fabric. It's been in the 'forest' stash for a while, and every time I saw it, it intrigued me. It looked very mysterious, and made me think of moonlight just barely filtering through a thick forest in winter. 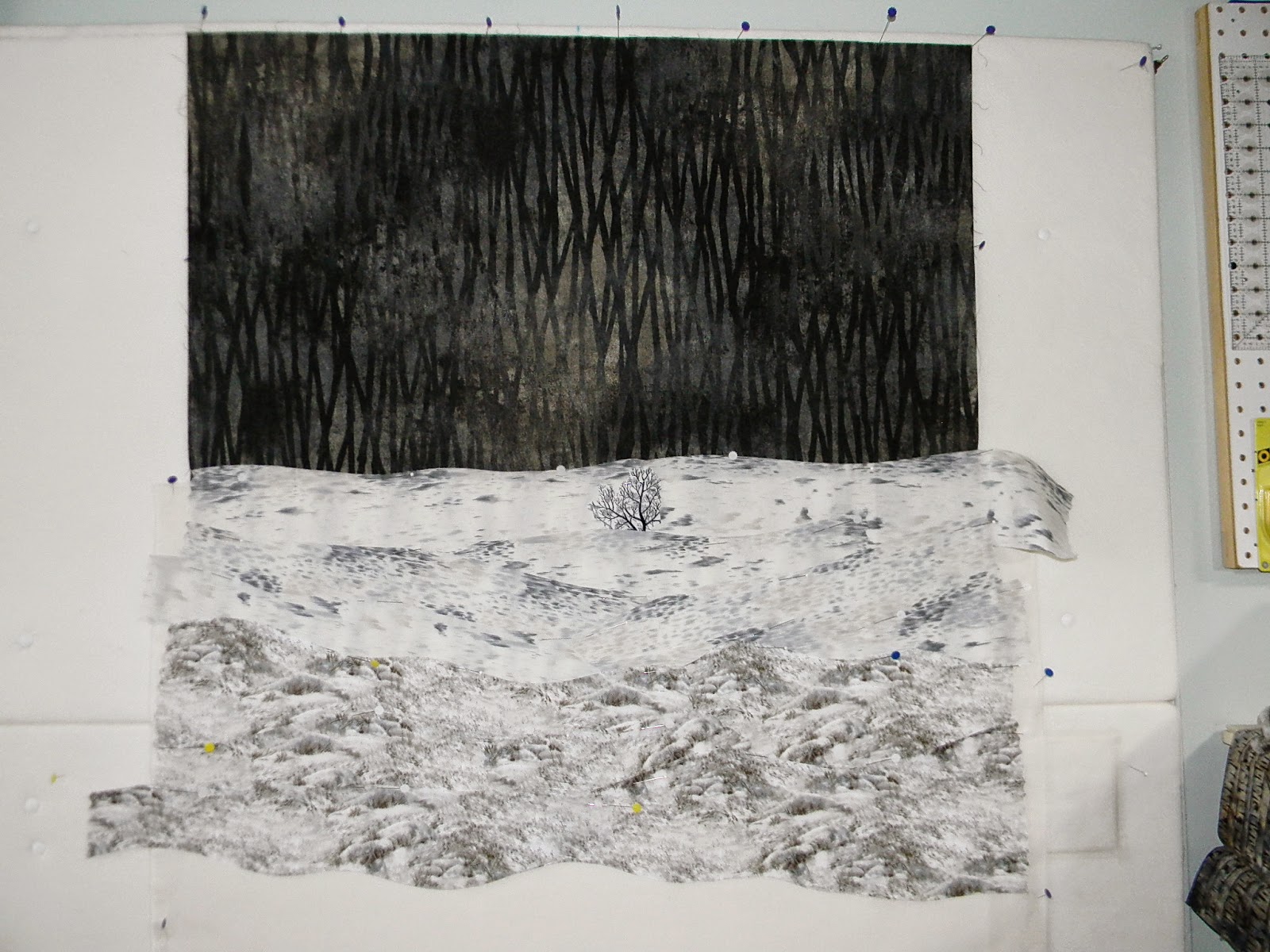 Some snow pieces were added (actually, practically thrown onto the design wall and left where they landed. I was determined this wasn't going to be a long, drawn-out, labor-intensive project.) 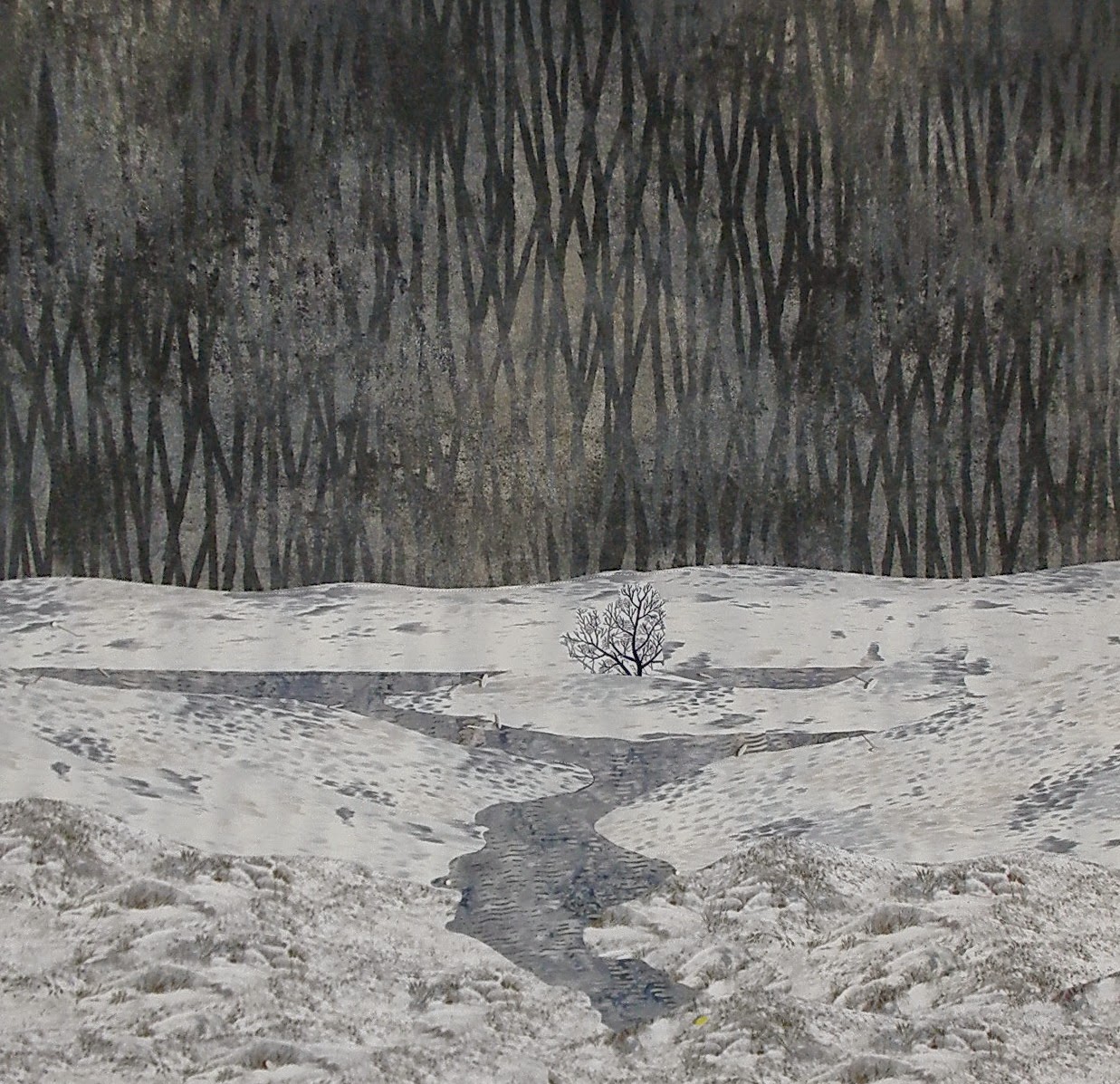 Next I envisioned a stream running through those low-looking areas. Tracing paper was laid over the snow, and lines were drawn where I thought the stream would most likely run. A light box was used to trace the stream outline onto scraps of blue-gray batik, which I then fused to the snow with Mistyfuse. (No throwing and landing during this step.) 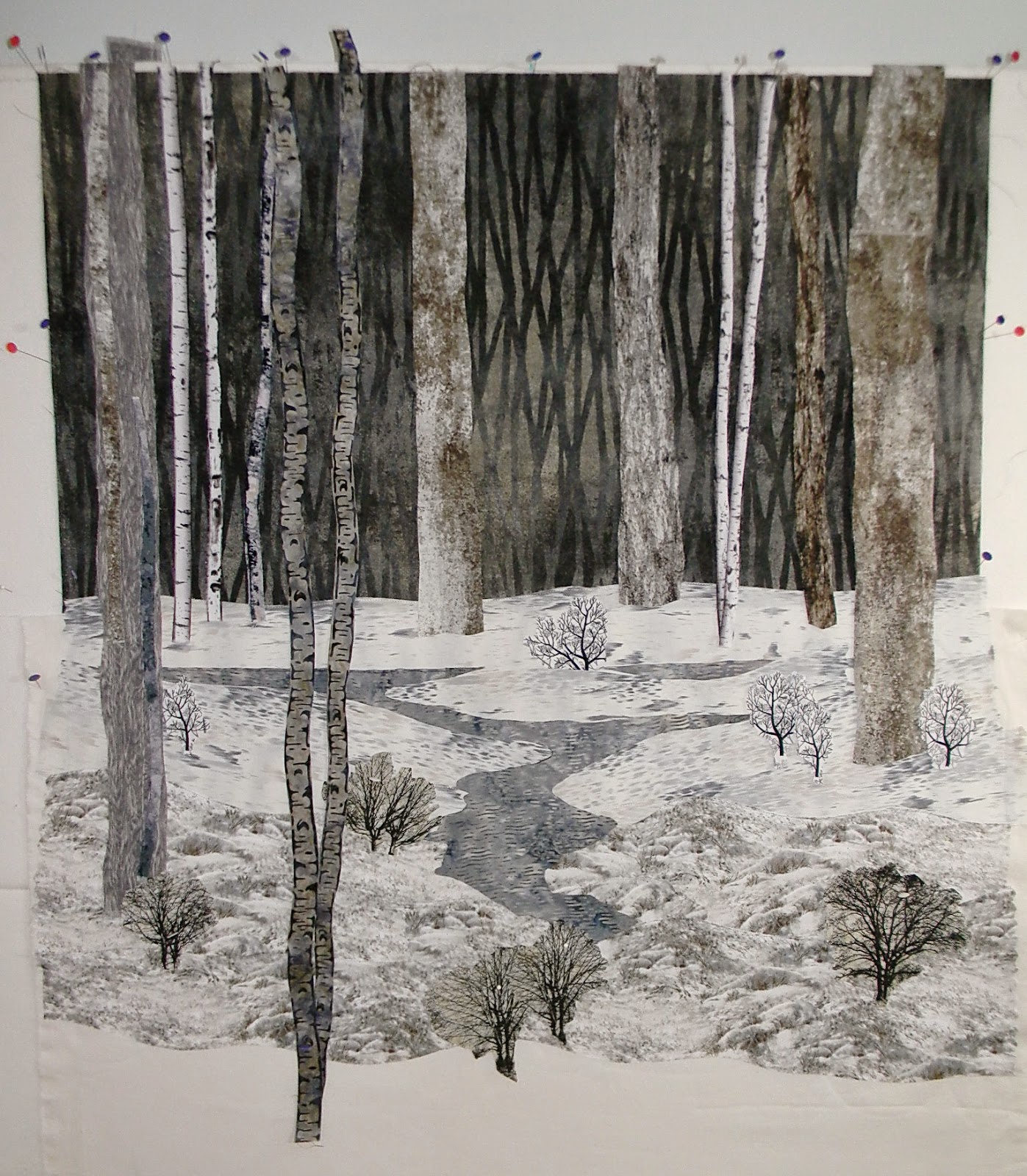 Next up were some trees, cut very quickly from different fabrics--some specifically for landscapes and some not. The tree trunk at center-left and the one at the far right were cut freehand from Stonehenge fabric by Northcott. I love that whole line and have many colors.


Some little bushes were cut from two different fabrics and pinned here and there, the larger ones placed in the foreground to maintain perspective.


By this time, I was lamenting the lack of any more snow fabric to add to the foreground. Sure, the quilt could end here, but I had really wanted it longer to give the scene more depth.

There was nothing in the stash that could even begin to pass for snow or combine well with the snow fabric already in the foreground. 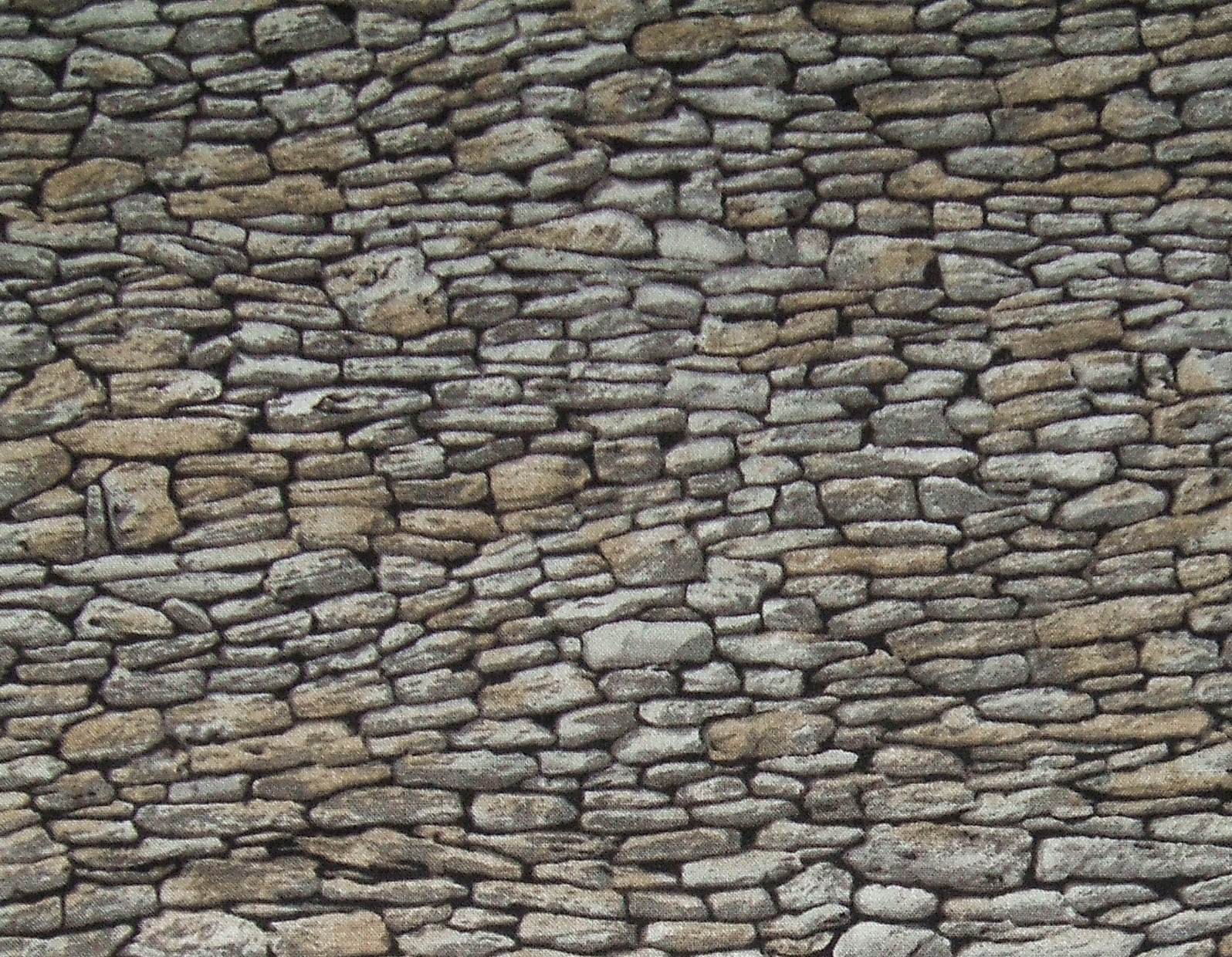 
This is Modascapes Stone Wall in gray, by Moda. I used it in The Tower (last photo on that blog) and in The Visit. I love, love, love this fabric. 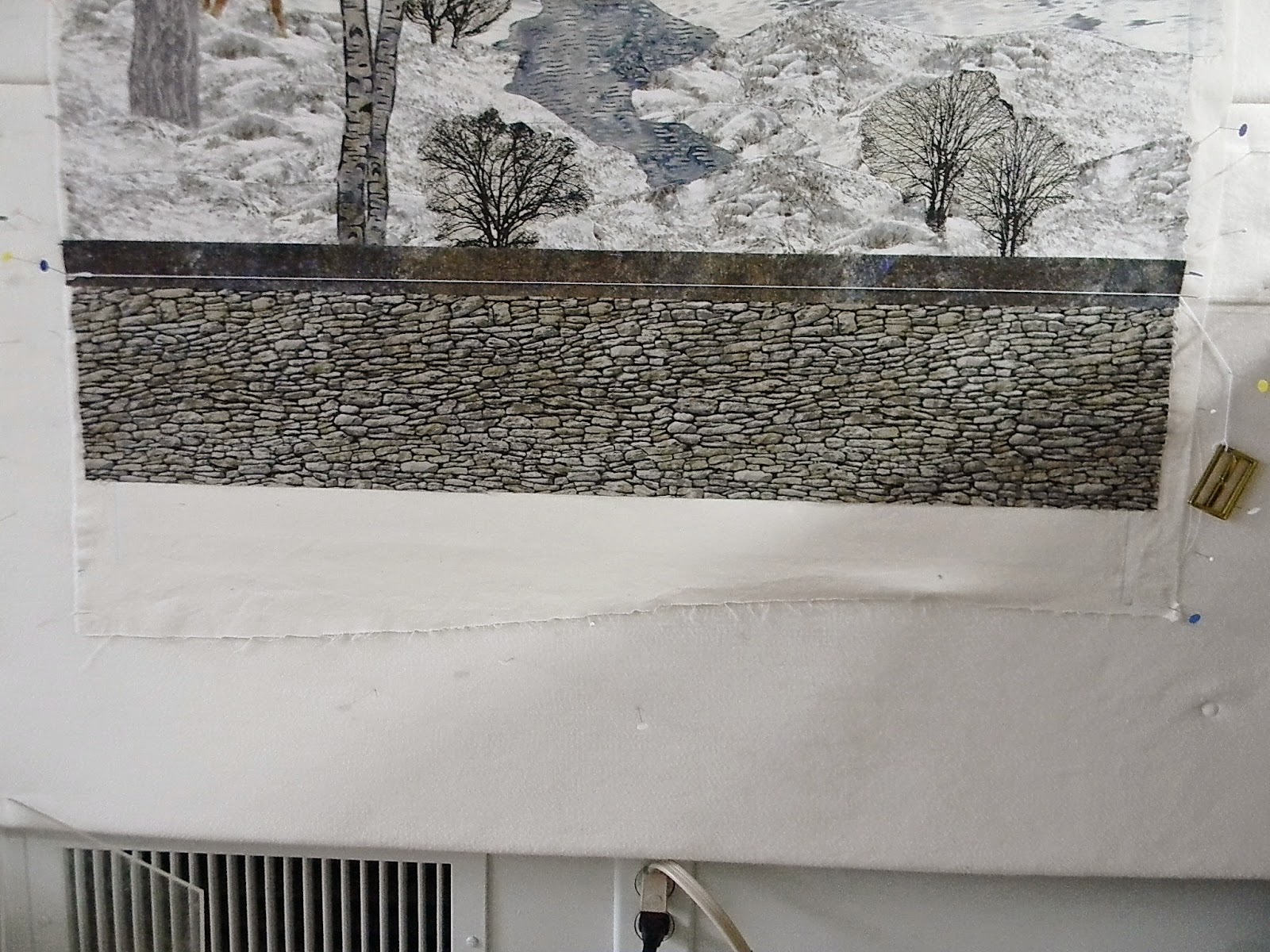 So I decided there would be part of a terrace wall in this quilt, built with Moda fabric and capped with Stonehenge fabric. 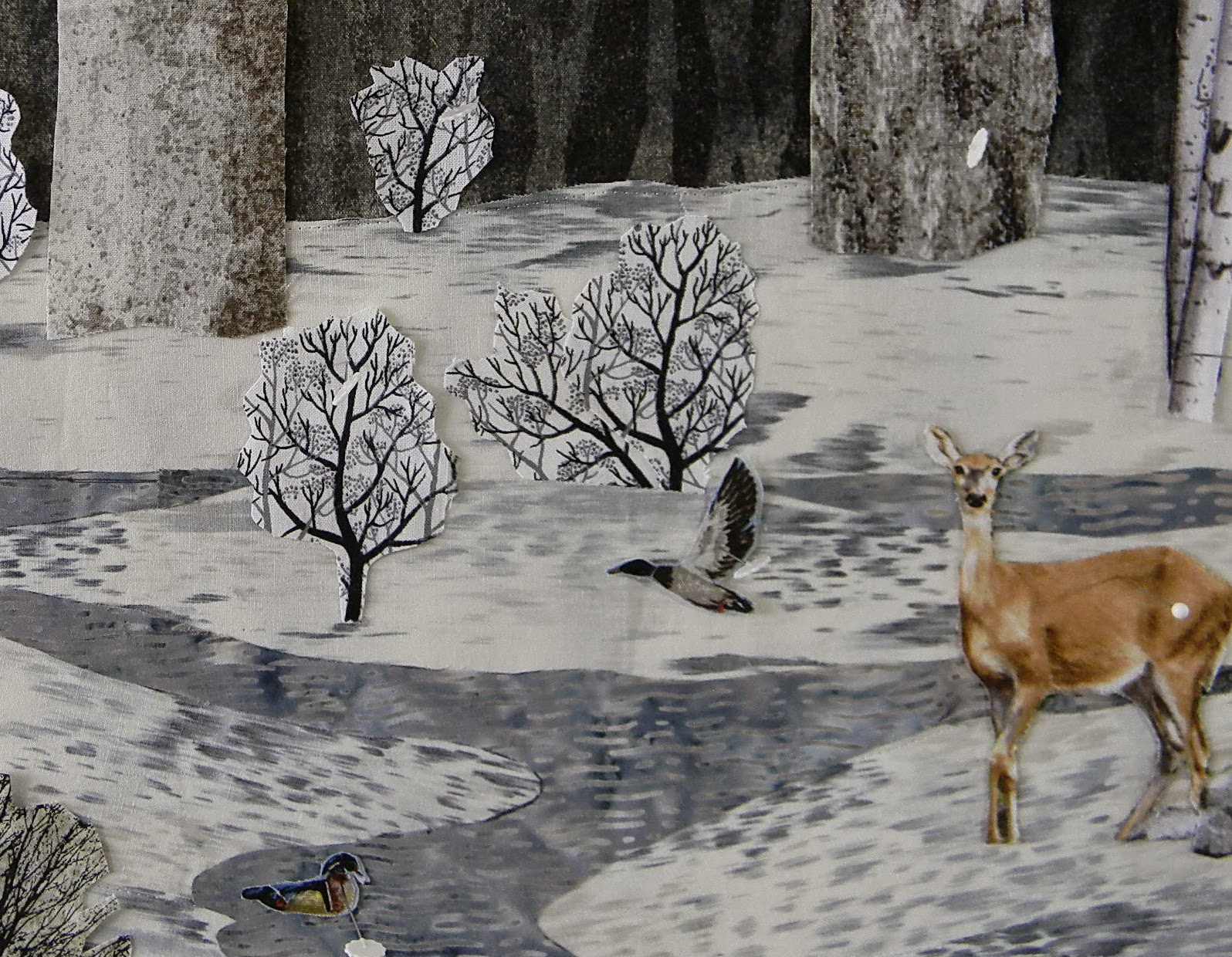 Then a buck and a doe were cut out and prepared for fusing, along with two ducks.
(The buck isn't showing here.)


The trees were all glued down (edges only), not fused.


Quilting was free motion, and was done far less densely than usual. I didn't want this to be a long-term project, nor was I willing to re-live the months of neck and shoulder pain that ensued after quilting The Visit. 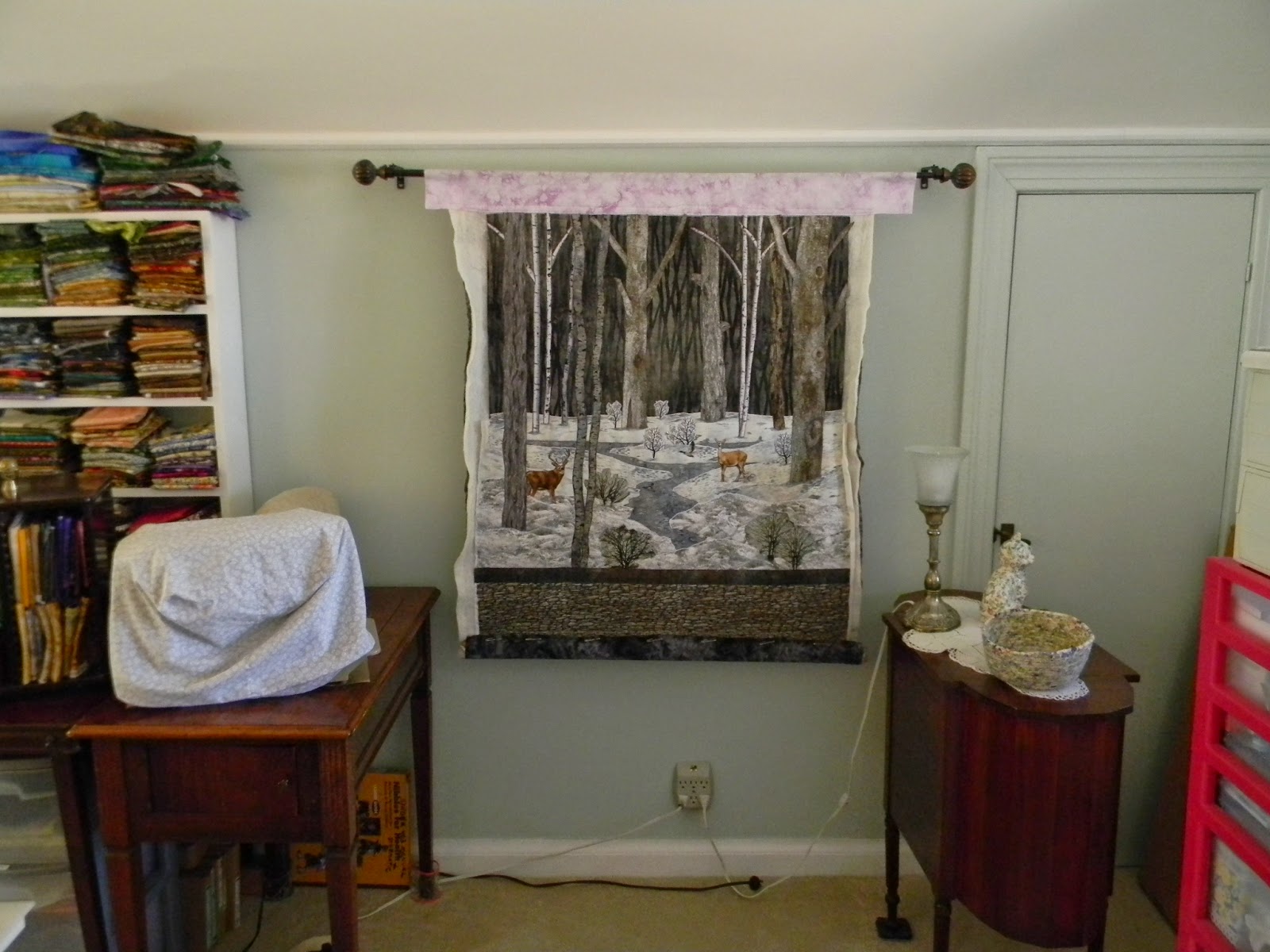 Because of the consistent, wider spacing, there was no warping. For that reason and because I feared puckering in the deer and the water, I decided not to steam-block the quilt....a first for me. Instead, an extension strip cut from scrap fabric was basted to the top of the quilt and used to hang it on a wall rod. The bottom of the quilt was turned up and pinned to hold two 3/4" diameter wooden dowels for weights. It hung for about 10 days before I felt that any stretching it might do on a rod was done. Time to take it down, square it, and trim it to finished size.

View from a Terrace is 30 inches wide by 36 inches long. The dark-brown binding worked better than anything else I had in my stash. 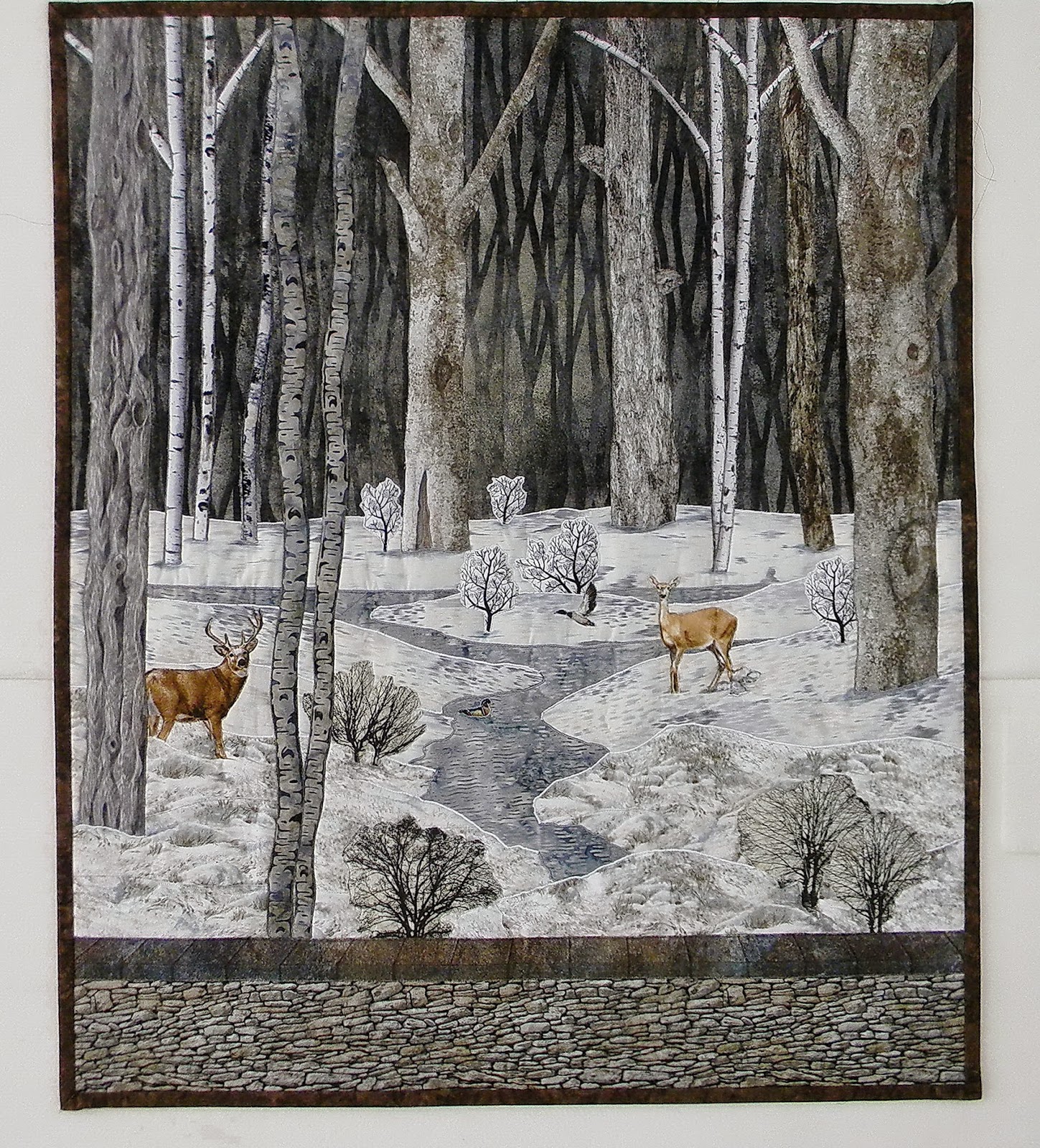 I'm still thinking about adding the bush I embroidered last year using Alison Holt's directions (see the blog post titled Aye, There's the Shrub). It might make the quilt look a bit cluttered, though. You can only add so many elements to your landscape before you cross the line between finished and overdone.

Hooking up here with Confessions of a Fabric Addict's Whoop Whoop Friday post. Take a look at Sarah's beautiful quilt for Emmy and catch up on the exciting news about the adoption of Nathaneal. Don't miss the reader linkups. Also hooking up with the latest of fab Lizzie Lenard's Vintage Sewing Free Motion Mavericks posts (where Muv is absent without leave, as far as I'm concerned. I'm beginning to think she is actually a spy for the British government. She says she'll be back soon, though. Meanwhile we are eating cakes from her auto-timed oven, and they are delicious! :) Also linking up with A Quilting Reader's Garden's WIPs Be Gone. Angie has been busy! 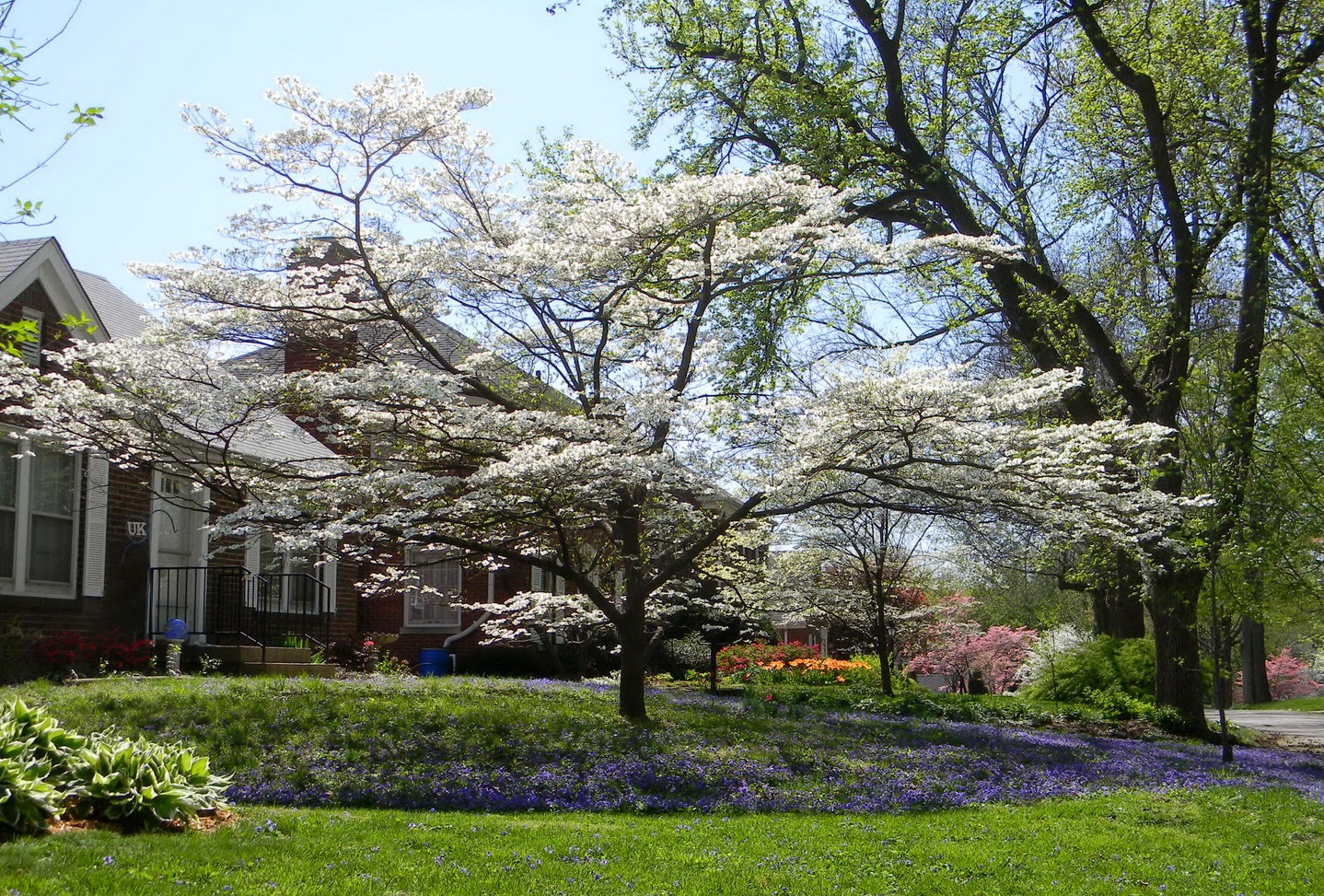 Everyone, have a great weekend! We're having our dogwood festival right now, and they couldn't be any prettier with full blooms and spotlights on the trees everywhere in the neighborhood. It looks like a fairyland. Also, Thunder Over Louisville, a pre-Kentucky Derby event and one of the biggest fireworks displays in the world, will be on the river tonight. We'll hear them better than we can see them from our house, but they're always on tv, too.


Whatever you're up to in your neck of the woods, enjoy!

Linda
Posted by Linda Wulf Koenig at 2:05 PM 16 comments: Links to this post

Saved by the Muse

The last couple of weeks brought the final touch to my granddaughter Lucy's quilt, as her birthdate could at last be embroidered on the quilt along with her name.


(For a full photo of Lucy's quilt, see the blog post titled 'Something Fishy.') 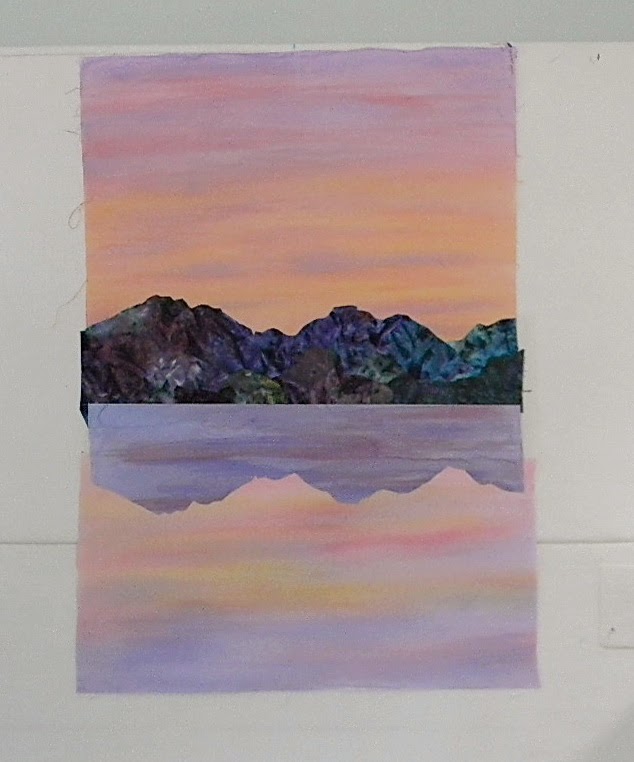 Also finished this week, except for the hanging sleeve, is the quilt that nearly got cut in half at one point. If you've visited this blog before, you might remember the piece on the left.

The water and sky were handpainted with diluted Tsukineko inks. After the batik mountains were added, I hit a wall. No, not the design wall, although I probably felt like hitting it at the time. :)  I mean, I drew a blank. My creativity suddenly took a hiatus, at least on this particular project. Nothing else seemed to be working on this background. 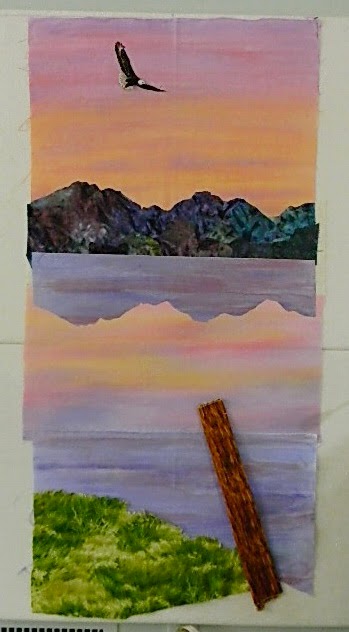 The best I got before giving up and putting it away were the additional fabrics auditioned in the photo at right. At that point, a couple of readers encouraged me not to do what I was threatening to do, which was to cut this piece apart in the middle and use it for two separate landscapes. I'm so glad they did!


About the time Lucy was due 4 weeks ago, creativity had not only come back but had gone straight into overdrive. At that point both this quilt top and one other were being put together in record time. Yesterday, this one was finished, except for the hanging sleeve. 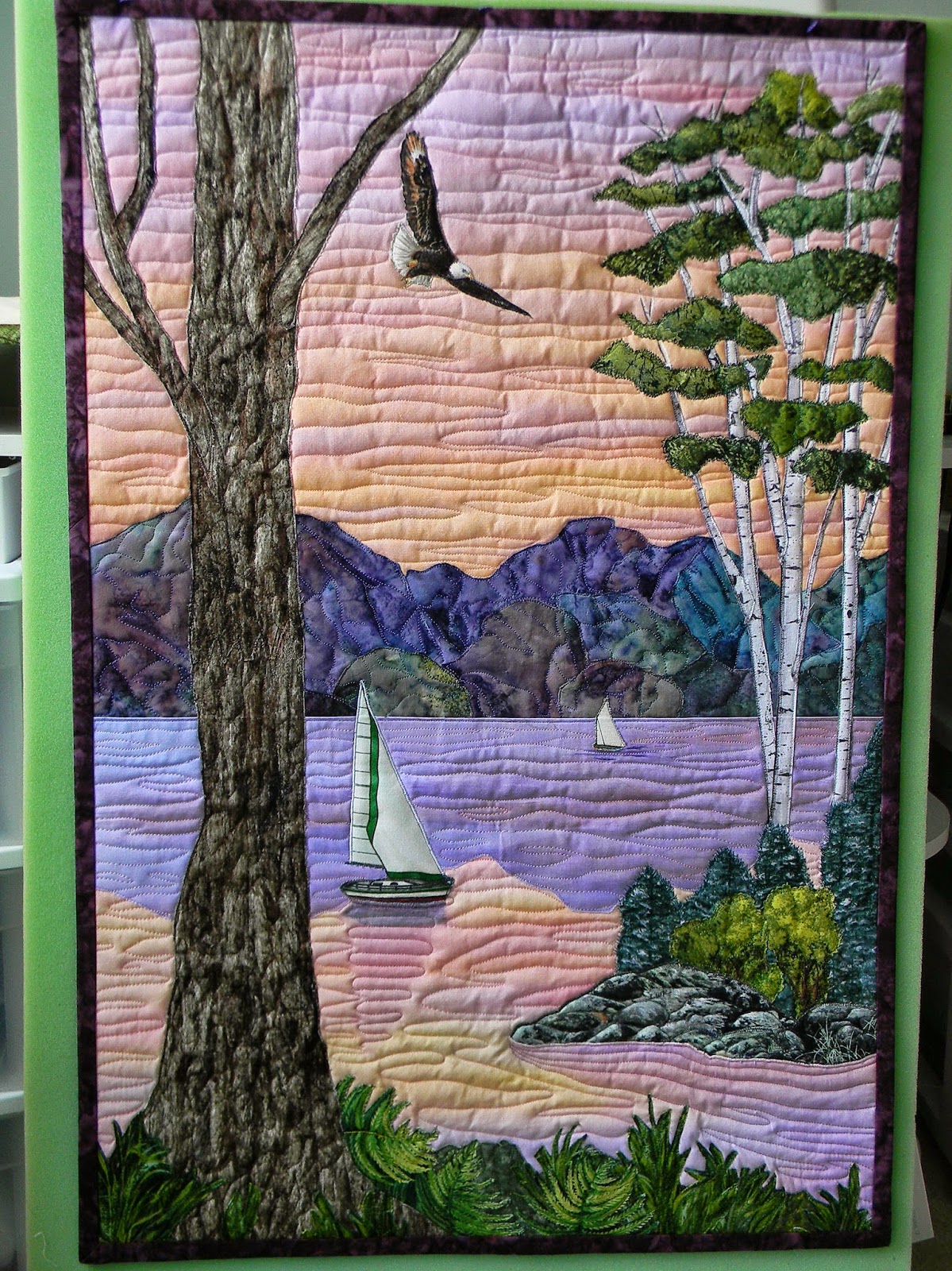 Photo #1 was taken on the design wall in the best light I could get at the time. Photo #2 was taken near a window with the quilt pinned to a big piece of green foam rubber. It gives you a better idea what the quilting looks like. Unfortunately, the tripod wasn't set up for #2, and you can tell...without it, I take crooked photos!


The other quilt top I mentioned being done is actually finished being quilted, as well, but isn't squared and trimmed and bound yet. I'll save it for next time.

Linking up with Lizzie Lenard Vintage Sewing's Free Motion Mavericks post and Confessions of a Fabric Addict's Whoop Whoop Fridays post. Be sure to check out the reader links at the end of each of these inspiring blogs.

Everyone have a great weekend, and stay safe from violent weather. There's been a lot of that around this last week or so.

Linda
Posted by Linda Wulf Koenig at 2:57 PM 12 comments: Links to this post